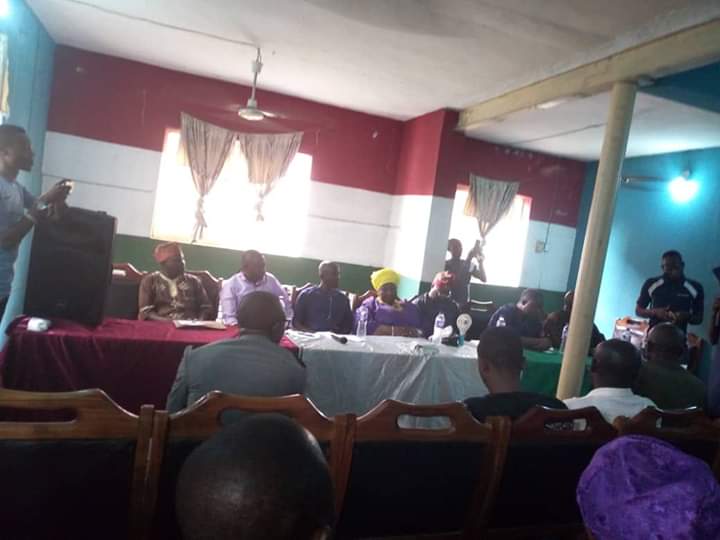 The Oyo State People’s Democratic Party Publicity Secretaries and social media information carrier yesterday held an interactive session to acknowledge various individuals who in their determination shoot the PDP to the resounding success in the last election through informing, orientating of party activities and meritorious efforts in neutralizing the opposition propagandas before and during the National and State elections.

Engr. Akeem Olatunji, the PDP state Publicity secretary welcoming the attendees, he congratulate the PDP information carrier warriors and volunteers for selfless service towards the election of Engr. Oluwaseyi Makinde, he described the winning as a collective efforts. He said the government of Engr Seyi Makinde will make use of the media as a medium to drives his programmes and actions starting from May 29, 2019. He pointed out that seventy percent of media messages will be promotion of the achievements of the governor-elect

In his address, Hon Kehinde Ayoola commended the unrelenting efforts of the PDP publicity secretaries on, during and after the election in the state, said the immeasurable contribution to the success of PDP candidates in the last election by the party Publicity Department and the local government Public Relations Officers can not be over looked

Hon. Ayoola further advised the PDP Image makers to adhere to journalism law and ethics. He implored every mouth piece of PDP to make use of language they comfortable of for using to deseminate the party information to general public as it will reduce grammatical errors ” Yoruba Language is not inferior to other languages” he stated.

He enjoyed the PDP communicators to be a bookworm and a knowledge seeker, which will make them to know something about everything.

Also the Oyo State PDP chairman of local government chairmen, Hon. Morohunfolu Banuso acknowledged the doggedness of Oyo PDP youths, he stated that, the youths stood with the party through ” Thick and Thin ” thereby ascribed each youth of the party as an epitome of success.

He charged the image makers of the party to forge ahead in their discharge of duties even as 2023 is around the corner. He called on the attendees to carry the good image of the party and Engr Seyi Makinde’s government. He maintained that Seyi Makinde became the governor-elect of the state due to a negative referendum on Senator Ajimobi and his cohorts.

Inconcluding the PDP interactive session of the PDP publicity secretaries and social media volunteers, the attendees agreed on the following points.

That, Engr Akeem Olatunji, the state publicity secretary will be in charge and be the decision maker in all the Oyo state PDP news dissemination platforms.

That the party will judiciously make use of social media and other news deseminating platform to propagate the activities of the Party and Governor Seyi Makinde actitivies.

That the party image makers will keep sensitising on social media platforms with a view to avoiding duplications.

That party members and loyalists must inform the party leadership quickly about anti government spreading so as to curtain the circulation and also, the information should reach appropriate quarters in case of emergencies and security challenges

Islamic cleric, Three Others Arrested With Human Skull In…

8 In Oyo Police Net For Swindling Over 300 Persons In…