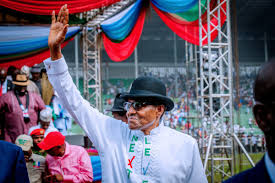 The Road Transport Employers Association of Nigeria (RTEAN) on Tuesday, February 12, declared its total support for President Muhammadu Buhari promising to mobilise 16 million votes for his re-election in the February 16 presidential poll. RTEAN national president, Osakpamwan Eriyo, disclosed this while speaking with newsmen in Abuja, the News Agency of Nigeria (NAN) reports. According to him, the association has over 16 million members who are always united in supporting a particular candidate during the election.

“Why we said that they should support Buhari is because he has done so much for the country, you can see today that we have good roads. “We have investments in the country and there is peace, if there is no peace we can’t have investment, we have over 16 million members in Nigeria, that is why we urged all of them to vote for Buhari for continuity. “Because if we vote for continuity all the good roads and good projects will continue and that is the reason why we decided to support the president,” he said.

Alhaji Musa Usman Kwande who is the acting chairman of the national executive committee of the group said they were aware two prominent northerners were contesting for presidency. He said they checked their track record and achievement before making a decision. The group noted the progress made in the fight against insurgency in the Buhari administration. He said: “Consequent upon the contributions of the incumbent government to the economic and infrastructural development and the government’s achievement in combating insurgency and other insecurity problems bedevilling the country, ACF believes President Muhammadu Buhari deserves a second term.