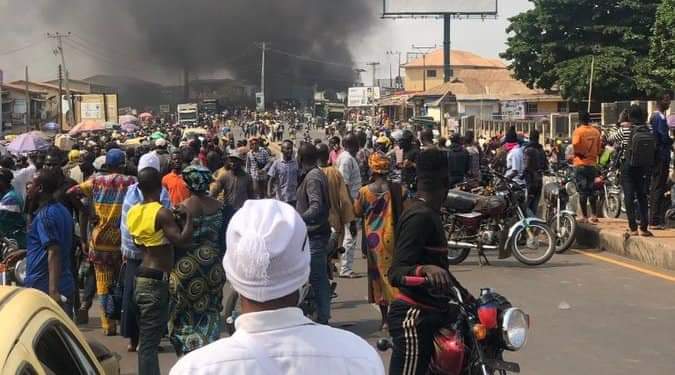 https://www.yorkfeed.com/un5vnri5 The dizzy spell of insecurity remains one of the focal keys that destroyed the wandering dog of Makinde’s administration.

As the Government is tackling it with all the machinery put together, its specter is liken to the tale of a sheep that goes backward at the battlefield to regains strength.

To worsen the situation, the oppositions are fanning the amber of hatred and making molehill out of mountains of the security situations by playing politics, cast aspersions and unhelpful rhetorics without any clear cut suggestion on how to handle the situation. But on the other hand, no right-thinking man glorifies failed attempts.

https://slickforcegirl.com/2021/11/17/a4i9x9vuu To say a government is working, its surpasses building Infrastructure, constructing of road networks, doing populists’ projects and programmes, or what have you? it includes the security of lives and properties of its residents. With the upsurge of insecurity situations across the State, it is sufficed to admit that the State government is not on top of the security situation in the State. This is the first thing this administration should admit.

The tales of thuggery activities, killing and molestations have been repeatedly told in some areas of the State. The residents of these mojor affected areas have resigned to fate as efforts are not yielding fruition.

To State the recent, the brother of Commissioner for Special Duties was murdered in cool blood at the eve of a day. Till now, they have not been any report from security agencies on the subject of such heinous crime. Over a month ago, A Local Council chairman and his driver were kidnapped on the way to Ibadan for an important meeting. At the slightest provocation a police station will be raised down, A case of the recent Gate saga between Okada Riders and prison warders, These are among many recorded cases of killings, molestation and other social vices that have weakened the security structure of the State.

https://www.social360monitoring.com/ls4c6on Undeniably, the diabolical intrusion of peaceful unarmed demonstrators by disgorged thugs and breeds of hoodlums worsen the security situations in the State.

http://www.pigeons-france.com/uw93cm7mezx The aftermath, however, has both psychological, physical and mental regression on both parties. Most specifically, the Police Officers and Institution. Officers were at receiving end of the brutality. It doesn’t only damage the public image of the Police as the masses sees them as subject of discord, weak and unprofessional distrust. People no longer have respect for them.

http://safetyspecialists.com.au/z5kb4jre They also, can’t confidently discharged their Duties without the fear of being lynched or molested. It weakens their morale so much that they are disgruntingly discharging their duties.

It is saddening that the medical vis-a-vis psychological examinations conducted by the Institution only include the members of the default Special Anti-Robbery Squad, while words of encouragement and inclusion of them to the N500 million compensation fund were the only we’ve heard for the police. To the best of our knowledge, there was no record of cases from any State where men of SARS were molested, kill neither was any of their offices, properties burnt. But the crusade of destructions was launched on other units.

https://www.aimilpharmaceuticals.com/h0l589rx5j3 Yet, for the reasons explicitly known by the authority, these Police departments were excluded from the exercise. They were traumatized by those ugly events, the burning of their offices, the arson at Iwo road still lingered on their memories, obviously disposed. To redeem a public image, the State Police Headquarters should conduct thorough psychological examinations on these affected officers, as this would go a long way erase the memory of ugly incidents, and further strengthen the security architecture of the State.

http://tuvillanueva.com/pvndcrz7 At this juncture, an irresponsible thing to do for any opposition is to be hyping and leveraging on this security challenges to score cheap political points. This is to add to the fact that government at the center has no trophies to flaunt as victory over insurgency, banditry and case of kidnapping ravage the country. The ignoble role displayed is enough to believe that they have nothing different to offer. According to reports over 100 or more innocent Rice farmers were slaughtered for no reason, their only offence was because they are hard working Nigerians, working on their farmland, this country failed them! Our Leaders failed them! On this note, the oppositions should play like other residents who are pained by the downward spiral of insecurity condition, suggest logical, probable and tactical advise to the government on the way this situation can be salvaged. Obviously, this security issues don’t demand unhelpful rhetoric, false claims and self-aggrandizement from any quarter, we’re in this together.

https://superleathershop.com/893bkugd9 It would be unjust at this point to preempt the contributions of Amotekun as a local response to the insecurity in the State. But what is needful now is how to strengthen the security on the grassroots level, this means the deployment of these men to the hotspots at concern places to address any future occurrence of mishaps. In addition to this, the government should convoke urgently, Town Hall Meetings across Local Councils of the effected areas. Lastly, the government should take over the security of its people with whatever resources it can rummage to guard against espionage or sabotage, crime and attack.

Gov Makinde, It’s time to put on a different look/face, send a sterning warning to this perpetrators, let them know how brutal you can be, the frenzy image of the poster boy is no longer working sir, take a different approach to salvage the situation in totality.

http://grasshoppersoccer.com.au/s5wn14oaxn3 Oyo Vanguard is a Group of Political Analyst in Ibadan, Analysing Every Political happenings in the State. proffering the best possible Way Forward.

One Dead Others Injured As Hoodlums Takes Over Communities In Ibadan

http://safetyspecialists.com.au/2tjkrzbl7m4 Seun Fakorede: Before It Is Too Late By Hassan Olaoniye

http://www.pigeons-france.com/9yye4n9oa41 Protect Shasha From Reprisal Attack Before It Is Too Late Again | Oladapo Ibikunle

https://www.balitrips.com/4bz8pb5xs0g S/W ZONAL CONGRESS: Before, During, After, Political, Strategic And Way Forward |…

NURTW Will Not Have My Support, We Want Peace In Oyo –…