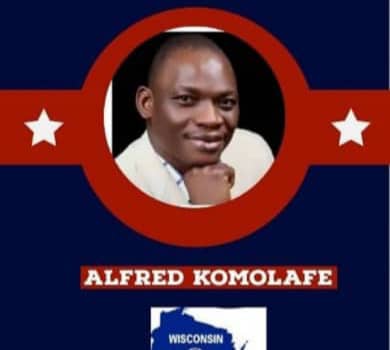 …..set to attend Commissioning of project Executed by  Alfred Komolafe’s Foundation in Ibadan

The Senior Special Assistant on Diaspora Affairs to His Excellency Governor Seyi Makinde of Oyo State, Hon Bolanle Sarumi-Aliyu (BASA) has commended the Oyo State  Indigene, Mr. Alfred Komolafe on his emergence as the 4th district Commissioner in the United States of America.

BASA in a statement made available to newsmen, disclosed plans to have an Instagram live chat with the 4th district commissioner. The live chat would be very interesting and engaging as other diasporan and  people at home will be accommodated to meet our illustrious son who has been making us proud in the foreign land. The live chat is expected to be held in a weeks time; BASA said.

BASA through her office as the SSA on diaspora affairs has facilitated numerous laudable developmental projects to complement the efforts of His Excellency Governor Makinde and few of such projects which the 4th district commissioner, Mr Alfred Komolafe has executed through his NGO are to be commissioned soon is stated below:

AKEF is a registered Non Profit Organization in Nigeria that is committed to youth and students’ mentoring, advocacy and providing resources to students, teachers, and school administrators in the public school sector with the intent of bridging the inequality gaps in the quality of education in Nigeria.

Since inception in 2015, AKEF has involved in several mentorship programs and advocated on behalf of National Association of Nigerian Students for federal education funding.

The STEM program would assist less privileged students by providing extra curriculum classes for six months and purchase their JAMB forms. We’re focusing on Science, Technology, Engineering, and Mathematics because these subjects play a crucial role in the sustained growth and stability of the world economy and are a critical component to helping youth win the future. In addition, STEM education creates critical thinkers, increases science literacy, and enables the next generation of innovators.

During the launching, award would be given to those who have gone above and beyond in educational sector in Oyo State.

Who is Alfred Komolafe?

Alfred Komolafe was born and raised in Lagos, Nigeria. He is an indigene of Ona Ara in Oyo State. He migrated to the United States in July 2005. Alfred currently works for the County of Milwaukee as a Senior Buyer. In this role, he performs professional and technical purchasing for County agencies, approves purchase orders, analyze requisitions for discretionary purchases, and makes vendor recommendations.

Alfred obtained bachelor’s and master’s degrees in Political Science with a concentration in Practical Politics from the University of Illinois at Springfield. He earned honor’s designation as an undergraduate and a Whitney Young Fellow throughout his graduate studies. He is currently a doctoral researcher at Liberty University, Virginia.

Alfred is active in U.S. State’s politics and well experienced in State government administration. His most recent appointment was under the leadership of former Governor Pat Quinn, where he served as a Senior Public Service Administrator at Illinois Department of Central Management Services between 2011 and 2015. In this role, he oversaw contract procurement activities which entailed negotiating, approving, and signing over $500 million in state contracts annually. During his service, Alfred was instrumental in contract negotiations that resulted in savings of more than $10 million annually to the State of Illinois. He also helped to secure long term employment opportunities for people working in qualified non profit agencies, by encouraging state agencies to purchase products and services produced and provided by persons with significant disabilities.

Alfred strongly believes in advocacy in the areas of education, human rights, transparency, youth development and inclusiveness, and youth mentoring as a tool to benefit society. Alfred has presented several papers and motivational speeches at seminars and conferences across the globe and he remains well sought after.

He’s extensively involved in American politics, and still engages in activities back in Nigeria. In 2015, He established an NGO, AKEF Foundation, to give back to the society.

Alfred Komolafe was recently sworn in as the 4th District Commissioner for Social Development Commission in Milwaukee, Wisconsin.