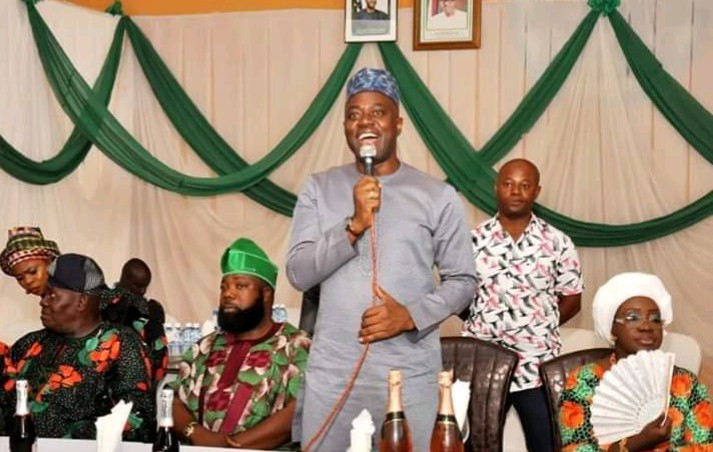 … Says govt in talks with FAAN for upgrade of Ibadan Airport

Oyo State Governor, Engineer Seyi Makinde said at the weekend that the people of Oyo State should get prepared for unprecedented development with him at the helm of affairs in the state.

Governor Makinde, who stated this while addressing a mammoth crowd that gathered for a civic reception in his honour at his ancestral village, Ajia, in Ona Ara Local Government Area of the state, said that he was already in talks with the Federal Airports Authority of Nigeria (FAAN) for an upgrade of Ibadan Airport to facilitate Cargo operations and international flights.

A statement by the Chief Press Secretary to Governor Makinde, Mr. Taiwo Adisa, quoted the Governor as saying that agro-allied services would benefit heavily from the impending upgrade of the Airport.

The statement also indicated that Governor Makinde restated his commitment towards fulfilling all his campaign promises to the people of the state, noting that his Government has begun different efforts to see to the development of infrastructure, education, agriculture and health sectors in the state.

Governor Makinde, at the event organised by the Ajia and Its Environs Descendant Union, declared that he would not disappoint the people of the state or break the trust that the people reposed in him by delivering good governance to the state and developing its nooks and crannies.

He admonished the youths in Ajia and across the state to take their education seriously by making judicious use of the free education policy of his administration so as to become useful and productive to themselves and the society.

The governor further said: “It has been said that a prophet is without honour in his own town. But today, the people of Ajia, my kinsmen, have honoured me and you have not made selfish demands from us, you have asked us to govern with integrity and the fear of God; you have warned us to be wary of sycophants and to continue to pay attention to the welfare of the people as we have been doing. I assure you that we will do all these and many more in fulfillment of our promises,” the Governor said.

He maintained that as parts of efforts to develop the state, he had begun discussion with the Federal Airport Authority on how to upgrade the Alakia Airport, Ibadan to an international airport to boost the economy the State.

He further said: “I have begun discussion with the Federal Airport Authority of Nigeria and they have given us certain conditions on the upgrade of our airport so that it can accommodate bigger aircrafts. When that is done, those travelling from Osun, Ekiti and Ondo will not need to get to Lagos before boarding flights and what that tells you is that Ajia and other rural communities around the airport as well as the economy of Oyo State, will soon witness a new dawn.”

Governor Makinde told a jubilant crowd of Ajia residents that he would soon begin the reconstruction of the Ajia Road.

He said that as a private citizen, he had offered to construct Ajia Road but that the previous administration in the state turned down the offer.

Makinde also stated that he had equally faced similar hostility from the previous administration in the state whose agents destroyed the borehole and the equipment deployed by his contractor when he was trying to build a borehole for Alesinloye Market in the state capital.

He declared that in a matter of weeks the State Government would review the Iyana-Agbala Road Project and make it a priority, noting that his administration would pay full attention to the development of rural settlements across the State.

He urged Governor Makinde to continue to place premium on the welfare of people as he had been doing as a private citizen.

Akinyele called on Makinde to make Ajia a model village as it obtains in South Africa and some other places.

Also in his address to welcome dignitaries to the event, chairman, Ajia and Its Environs Descendants Union, Engr. Amos Fakayode, commended Makinde for making Ajia and Oyo State proud through his achievements within the first 100 days in the office.

He noted that the community was neither disappointed nor surprised at the giant strides of Governor Makinde, adding that as a private citizen, the Governor had singlehandedly provided electricity to the community.

He said: “We welcome Governor Seyi Makinde to Ajia, his ancestral root. We are grateful to God and proud of you. As you have started well, may you end well. We have been hearing of you, many states are making you the reference point. We, your kinsmen, are proud of your achievements in 100 days. We believe you can do more and we want you to do more, because we want to remain proud of you after you might have left office.”

He appealed to the Governor to provide good road networks into and out of Ajia; pay attention to the employment and empowerment of its youths and above all, make it a model village with model primary, secondary and tertiary institutions, among others.
He noted that Ajia community would remain solidly behind the Governor and continue to pray for his successful tenure in the office.

The reception was attended by top government officials including the Secretary to the State Government, Mrs Olubamiwo Adeosun, chairman of the Advisory Council, Senator Hosea Agboola; commissioners, Special Advisers, Heads of parastatals and agencies as well as Special Assistants.

Just In : Ajimobi Steps Down As Access To Basic Medical Care…