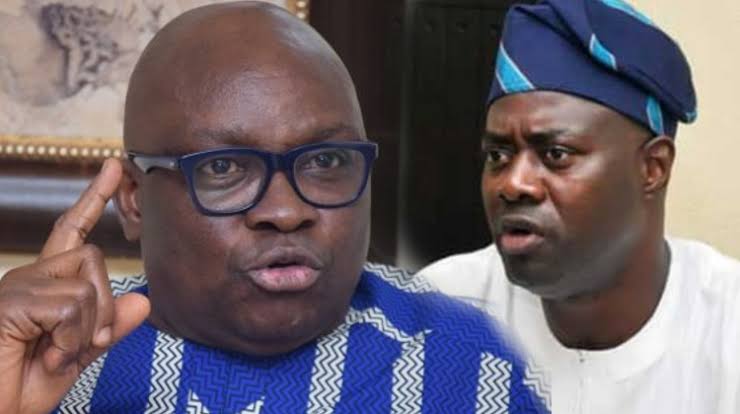 A chieftain and leader in Oyo people’s Democratic Party (PDP ), Alhaji Bisi Olopoeyan has further explained his and other party leader’s political association with former Ekiti state governor, Ayodele Fayose as normal and necessary for the progress of PDP, said thou, not to contest leadership position with governor Makinde but also sees Fayose as a politician who still has the political weather to lead PDP in Southwest zone.

he said since it only required individual decision to choose own leader and consensus to accept leader for the party, so nobody should be criminalised in PDP for
going into a meeting with Fayose in Lagos, as all zonal leaders knows he ( Fayose ), has the charisma and political experience.

Olopoeyan on a radio program in Ibadan on Saturday morning monitored by westerndailynews said, the party’s constitution didnt automatically conferred leadership on an elected officer of the highest rank at local, state, zonal, or national but they doing it only by tradition.

The PDP chieftain in Oyo said, no one is contesting zonal leadership with governor Seyi Makinde of Oyo state but it was the governor that decided to factionalise the party in Southwest when he called few people to his zonal meeting held in Ibadan.

” We were not called to Ibadan meeting, we only went to where we were called, Fayose as one of zonal leaders called us for a meeting, so there is not crime in attending such meeting since it is for the progress of our party.

” Nothing like a governor been the leader of PDP at zonal level in the past, not in the constitution, in 2003 when we had five governors , no one was appointed as a leader ahead others, each hold onto his state, not interfering in other state party affairs, it was during Fayose when he was the only governor in Southwest zone, and was only adopted to be the overall leader just for all members of the party to have a rallying point for negotiating for the zone at the national level, that all, there was no governor saddled with such leadership before until 2014, when we just picked Fayose, so, since Fayose entitled to it, no one is fighting governor Makinde about it but it was him that created scenes by not calling PDP Bigwigs in zonal party.

Olopoeyan claimed that, the zonal meeting held in Lagos was the authentic one, compared to one held in Ibadan, said all recognised zonal party leaders attended the Lagos meeting with same agenda.

When speaking about his recent outburst concerning his party administration in the state, Olopoeyan said, he is not after government money or asking Mr. governor to be dashing him money, but he is clamoring for the welfarism of the party members.

” Am not bothered about how the government is been run, or ask for government money, all am fighting for is for all our party members who worked day and night during the electioneering to enjoy as a ruling party members.

” All of them are my friends and we will continue to be friends despite not in the same party” Olopoeyan stated.