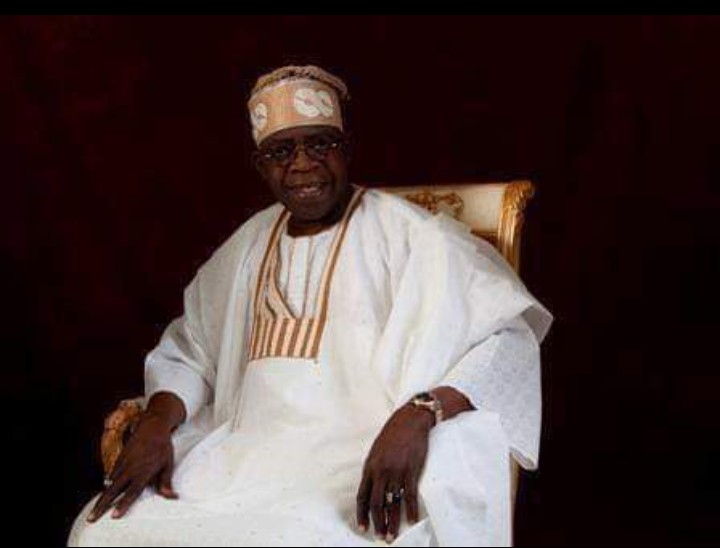 Bola Ahmed Tinubu was elected Senator for the Lagos West constituency in Lagos State, Nigeria in 1993, he also was elected governor of Lagos State (1999 – 2007). He is said to be among Nigeria’s most successful politicians ever. He is currently the national leader of the ruling party in Nigeria, All Progressive Congress (APC).

Asiwaju Bola Ahmed Tinubu was born in Lagos, Nigeria to the illustrious Tinubu Family of Lagos State. He attended Richard Daley College, Chicago Illinois, where he earned himself a place in the honors list of the College. He subsequently proceeded to the Chicago State University, Illinois where he obtained a Bachelor’s degree in Business Administration (Accounting and Management).

During his undergraduate years, he was honored with the Outstanding Student’s Award, The University Scholar’s Award and the Certificate of Merit in Accounting and Finance.

On his arrival in the U.S. in 1975 and with the support of an ever-adoring mother, this courageous youth, faced with an unflinching zeal to succeed, took on such menial jobs as dishwashing, night-guard and cab-driving to see himself through the initial difficulties of school at the Richard Daley College, Chicago, Illinois.

The brilliance of this young Nigerian showed in his ability to make the honours’ list of Richard Daley College. He subsequently transferred to the Chicago State University, Illinois, graduating with honours in 1979 and earning a Bachelor’s Degree in Business Administration (Accounting and Management). During his first year in Chicago State University, young Bola was given the rare privilege to partly teach other students of his Faculty remedial tutorial classes. Most of his colleagues and contemporaries at the university attributed their improved grades to his tutorial lectures.

With his successful academic profile, young Bola contested and won his first political election as the President of the Accounting Society of the institution in his final year at the University.

Upon graduation with honours and several awards, Bola Tinubu cut his professional teeth at the American-based Arthur Anderson, Deloitte Haskins and Sells (now called Deloitte Haskins and Touche) and GTE Service Corporation – the largest Communication and Utility Company in the United States of America.

Meanwhile, at Deloitte Haskins and Sells, the young and professional Bola broadened his experience by participating in the auditing and management consultancy services of General Motors, First National Bank of Chicago, Procter and Gamble, International Harvester, GEC and other Fortune 500 firms.

On his return to Nigeria and with his international experience in Financial Management, young Bola joined Mobil Producing Nigeria as a Senior Auditor before he retired as the company’s Treasurer.

Asiwaju Bola Tinubu opted fully for public service in exchange for his lucrative job at Mobil. His first foray into active politics was as a founding member of the defunct Social Democratic Party (SDP).

In 1992, he was elected as an Honourable Senator of the Federal Republic Nigeria to represent Lagos West Senatorial District. At the National Assembly, he distinguished himself as the Chairman of the Senate Committee on Banking, Finance, Appropriation and Currency – a foremost committee of the Senate.

With the annulment of the June 12, 1993 Nigerian Presidential Election and the consequent fresh militarization of the Nigerian politics, Asiwaju Bola Ahmed Tinubu became a founding member of the famous pro-democracy group, the National Democratic Coalition (NADECO) which, for several years, engaged the military for the very soul of Nigeria. Subsequently, Bola Tinubu suffered many arrests and detention, harassments and constant threats to his life forcing him to flee Nigeria for his personal safety. He, however, did not give up the struggle as he joined NADECO abroad to continue the agitation for a restoration of democratic governance and the rule in the country.

In 1998, Asiwaju Bola Ahmed Tinubu returned to Nigeria to heed a call for all Nigerians to join in the National Reconciliation and Development. A year later, he began his two-term public service as an elected Executive Governor of Lagos State on the platform of the Alliance for Democracy (AD).

For his excellent performance as the Executive Governor of Lagos State of Nigeria (1999 – 2007), Asiwaju Bola Ahmed Tinubu received several awards. These include Best Governor in Nigeria for Y2000 by the Nigerian-Belgian Chamber of Commerce; Y2002 Best Practices Prize in improving the living environment, awarded by the Federal Ministry of Works and the UN Habitat Group; Y2000 Best Computerized Government in Nigeria Award by the Computer Association of Nigeria. Asiwaju Bola Ahmed Tinubu was conferred with the Honorary Doctor of Law Degree by the Abia State University in recognition of his immense contribution to democracy, good governance and development of Nigeria. He is the proud recipient of numerous other chieftaincy titles and a patron of many professional and social organizations.

As an astute political strategist, Asiwaju Bola Ahmed Tinubu survived the massive incursion of the ruling Peoples Democratic Party (PDP) to the South Western States of Nigeria as the lone re-elected Governor of the Alliance for Democracy (AD). This led him on a regular collision course with the PDP-controlled Federal Government, especially on his creation of additional 37 Local Council Development Areas for Lagos States. A Supreme Court judgment in his favour stated that the Mr. Olusegun Obasanjo’s Federal Government should release the seized statutory allocation of the Lagos State Local Government funds.

Asiwaju Bola Ahmed Tinubu was actively involved in the creation of the Action Congress (AC) political party as recourse to the decimated Alliance for Democracy (AD). Rallying like minds across the country, he sold sound ideals and programmes on this fresh and new political platform. Within a few months, he transformed this new party as the credible opposition to the PDP in the country.

His political career began in 1992, when he was elected to the Nigerian Senate representing the Lagos West constituency in the short-lived Nigerian Third Republic.
After the results of the 12 June 1993 presidential elections were annulled, Tinubu became a founding member of the pro-democracy National Democratic Coalition (NADECO), which mobilized support for the restoration of democracy and recognition of the 12 June results. He went into exile in 1994 and returned to the country in 1998 after the death of military dictator Sani Abacha, which ushered in a transition to civilian rule.

In the run-up to the 1999 elections, Bola Tinubu was a protégé of Alliance for Democracy (AD) leaders Abraham Adesanya and Ayo Adebanjo. He won the AD primaries for the Lagos State gubernatorial elections in competition with Funsho Williams and Wahab Dosunmu, a former Minister of Works and Housing. In April 1999, he stood for the position of Executive Governor of Lagos State on the AD ticket and was elected.

When he assumed office in May 1999, Bola Ahmed Tinubu promised 10,000 housing units for the poor. During his eight-year period of office, he made large investments in education in the state. He also initiated new road construction, required to meet the needs of the fast-growing population of the state.

The Oloye Tinubu, alongside a new deputy governor, Femi Pedro, won re-election to office as Governor in April 2003. All other states in the South West fell to the People’s Democratic Party.

He was involved in a struggle with the Federal government over whether Lagos State had the right to create new Local Council Development Areas (LCDAs) to meet the needs of its large population.

The controversy led to the Federal government seizing funds meant for local councils in the state. During the later part of his term in office, he was engaged in continuous clashes with PDP powers such as Adeseye Ogunlewe, a former Lagos State senator who became minister of works, and Bode George, southwest chairman of the PDP.

Relations between Bola Tinubu and deputy governor Femi Pedro became increasingly tense after Pedro declared his intention to run for the gubernatorial elections. Femi Pedro competed to become the AC candidate for governor in the 2007 elections, but withdrew his name on the eve of the party nomination. He defected to the Labour Party while still keeping his position as deputy governor. Tinubu’s tenure as Lagos State Governor ended on 29 May 2007 when Babatunde Fashola of the Action Congress took office. Fashola had been Chief of Staff to Bola Tinubu.

Today, the great legacy of Asiwaju Bola Ahmed Tinubu is built on by his successor, Mr. Babatunde Raji Fashola (SAN), who served as his Chief of Staff. Continuation of Tinubu’s outstanding policies makes the present administration of Lagos State an exceptional and the foremost Government in Nigeria.

The Jagaban Borgu still marches on in the political landscape of the country, with a resolve to take on any challenging task with positive public to reduce poverty among his people.

Following the victory by the People’s Democratic Party (PDP) in the April 2007 elections, Bola Tinubu was active in negotiations to bring together the fragmented opposition parties into a “mega-party” capable of challenging the PDP in 2011. In July 2009, he called for implementation of electoral reforms spelled out in the Uwais report to ensure that the 2011 elections would be as free and fair as the elections of 1993 had been. In December 2009 there were reports that Babatunde Fashola and Bola Tinubu had fallen out over the issue of whether Fashola should run for reelection in 2011, with Tinubu said to be supporting the Commissioner for Environment, Muiz Banire, now National APC Legal adviser but later criticizing what he’s a beneficiary.

Tinubu formed a new party alongside Muhammadu Buhari a party which was named All Progressive congress (APC). The goal was to build a stronger party to get rid of the ruling party PDP.

In 2015 Tinubu’s target became a success as APC won the presidential elections and most of the polls across the country.

Tinubu is married to Oluremi Tinubu, the current Senator of central Lagos State. His youngest daughter, Abibat Tinubu, graduated from a Music college in Boston, Massachusetts, US in 2013.

Come, join me in celebrating a living legend, grassroots mobilizer, National leader, the custodian of our political history, astute politician, a political prophet and excellent personified. My prayer for him is that the Almighty God shall continue to protect him, grant him good health and prosper him more. I believe that through his leadership, Nigeria will not be the same, in handling unemployment, insecurity and economy crisis, Nigeria shall be great again.