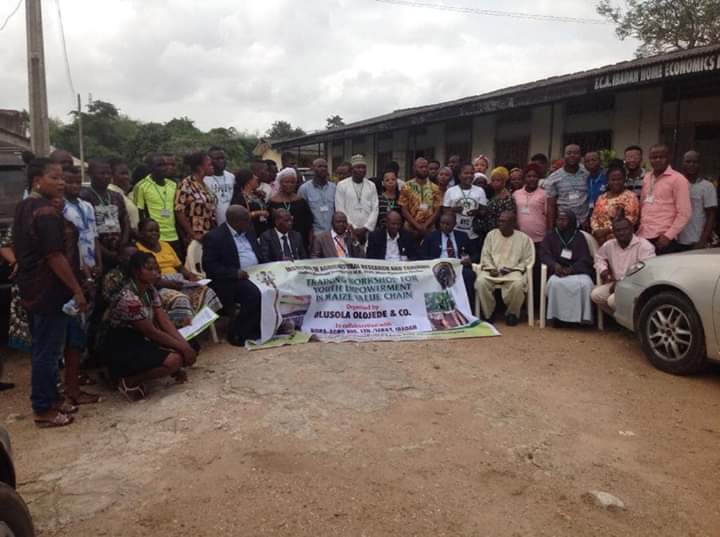 In continuation of his unrelenting efforts towards bettering the lives of members of his constituents, the Oyo South Senatorial district distinguished lawmaker, Sen. Rilwan Adesoji Akanbi through the Senate and House Committees on Agriculture in collaboration with Bora Agro. Nigeria Ltd./IAR&T, Ibadan on the 19th of March 2019 empowered youths in his constituent on Maize value chain.

The youth empowerment training which went on for two days was held at Adebisi Adebowale Training Hall, IAR&T, Moor Plantation, Ibadan. It was organised by Olusola Olojede & Co. and the training focused on PROFITABLE MAIZE PRODUCTION UNDER CLIMATE CHANGE AND OTHER CONSTRAINTS IN SOUTHWEST NIGERIA.

This was part of his measures towards reducing unemployment in the society and it all goes down to his determination in ensuring that the masses and most especially unemployed youths and women are engaged in agriculture and other profitable ventures in the absence of white collar jobs.

The empowerment training which is a continuous programme had twenty beneficiaries from Oyo South for this phase and they all received certificate of attendance and #50,000 each to set them up and put what they have learnt into action.

Speaking with news men in Ibadan recently, Senator Akanbi said “This gesture is in furtherance of our efforts in the area of job creation and youth empowerment”.

According to him, he said, “the programme is aimed at empowering the beneficiaries to start their entrepreneurial journey and enhance their independence. Empowering them will yield further benefits for society when they grow their businesses, employ others and take adequate care of their dependents”

Within his 4 years at the senate, no fewer than 5,000 women and youths in Oyo State that has benefited from various empowerment programmes organised by the Senator representing Oyo South Senatorial District, Senator Rilwan Adesoji Akanbi both as a lawmaker and prior to him becoming a Senator.

Ahead May 29: Buhari Orders Shittu Others To Submit…