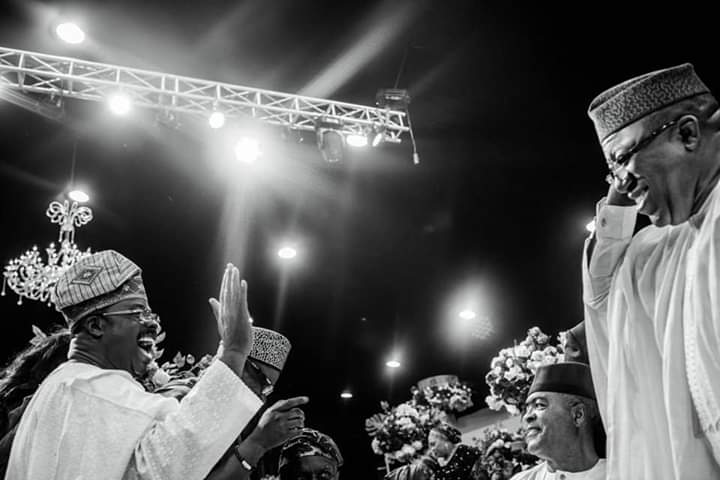 “In a man’s life, there are many low and high seasons; seasons of failures and seasons of successes. It is the quality of courage with which a man handles his success or failure, that determines the kind of person he is”

The takeaway from this is that, Leadership entails not just vision but quality of courage. Otherwise how can you lead people in the face of adversity? How do you lead in war? How do you lead whilst enjoying success? How do you lead in all situation? If you don’t know where you want to go to (Vision) and, you don’t have the strong will to see your journey through(Courage), then you have no right to ask people to join you on the journey.

This somewhat simple analogy wraps into the wealth of knowledge I have about the persona and leadership of Governor Abiola Ajimobi.

My first encounter with him was sometime in June 2011 during his meeting with the then set of Permanent Secretaries; it was shortly after he was sworn-in as the Governor of Oyo state. I was the Permanent Secretary in the Ministry of Education, and the first impression most of us got from that maiden meet was that, we just got in our hands, a man who had a clear grasp of his vision for Oyo state.

He was bold and daring about his ideas.

True to those words, Governor Ajimobi took no time to indeed introduce a plethora of productivity-driven attributes from his private sector experience into our public service.The idea of key performance indicators (KPIs) as instrument to measure performance, a better dress code, and the Efficiency Unit, were few of all the concepts he brought to redefine our public service. Though, many did not initially understand nor take to the changes, however, it is no gainsaying that all performance indices show that since the assumption to office of Gov Ajimobi, the productivity in the Public Service has been on the rise.

The Federal Government had at the time introduced the ‘Efficiency Unit’ to ensure that the level of productivity is raised from the Nigerian public service, and Governor Ajimobi was probably the first to adopt it at the State level.

All these at those early days proved to us that he was [and is still] a doer. A first impression that lasts till this moment.

Right from those initial days in 2011, I came to the quick understanding that Ajimobi was the type of person, the kind of leader who bravely chooses to go down the untraveled path in his drive towards achieving success at any cause he deems needful, especially for Oyo state.

He adopted the Treasury Single Account (TSA) before the Federal government even mused about it. He travelled that path which seemed unpopular, and its success at the time and apparently till now, proved what I stated earlier that the man had a clear vision, a distinct purpose for his administration, and most importantly, how to achieve it.

I got to know more about his attributes at close contact when I worked with him as the Head of Service, Oyo State. In 2014, Governor Ajimobi appointed me as the Head of Service – according to him, he chose based on his need of a brilliant and creative mind who can fit into his own idea of operations and vision for the state.

This afforded me the opportunity to know his ways. He is a highly disciplined man, he doesn’t spare any ounce of laziness or dereliction to duty. His knack for structured and patterned administration is testament to this fact.

After serving for 35 years in the Oyo State Civil Service, I can unarguably say that Governor Abiola Ajimobi was the one who brought a ranking sense of discipline and culture of renewed productivity into our Civil Service. For example, he does not believe in the idea of ‘working hours’, rather, to him, work continues until the job is done and on this, he isn’t a leader who simply leads by words but he does by example. I can attest to the fact that he sleeps for a maximum of 3hrs…working all through 21hours of the day until his tasks are executed.

Of all these attributes however, there are two that are very endearing to me and, I have seen moving brilliantly together are, his insurmountable spirit and his prowess at financial management.

To Governor Ajimobi, there’s no such thing as a ‘challenge too big to handle’. His insurmountable spirit is wired to squeeze water out rocks.
He is always bold in the face of uncertainty or adversity, and this had a way of arming members of his team with courage and motivation to keep striving when the going gets tough.

Permit me to give an example. In 2016, when the effects of recession hit hard, Oyo state Government, like most states too, careened into a deep financial mess. Arrears of salaries up to 10 months were owed and it was a dark row of days. Not to be outfoxed by this challenge though, Governor Ajimobi deployed his creative mind and fiscal ability to expand Oyo State’s spring of revenue, securing a lot of Public-Private-Partnerships in the process. The administration was able to clear all arrears afterwards and today, no civil servant is owed in Oyo state.

Our quest to find light through those dark days exposed his courageous persona. Governor Ajimobi is a man of quality courage.

“In a man’s life, there are many low and high seasons; seasons of failures and seasons of success. It is the quality of courage with which a man handles his success or failure, that determines the kind of person he is”

These were the Governor’s words to us at those times, and they ended up becoming words we kept on marble. He has since remained bullish with his courage, consistently troubleshooting challenging situations to brew solutions for them. This is where and why people wrongly misunderstand his idealist and perfectionist nature at bullishly going after these challenges, until their best reasons come to bare.

Behind that outward nature of a bullish courage to get things done the right way though, is a teacher, a coach and a mentor who deploys a fatherly gait to get the best out his team.
AJIMOBI LISTENS…
It is said that smart leaders know what they don’t know. I mean, learning is a constant process throughout one’s life, and it doesn’t stop when you have become a team leader. This is another character Ajimobi epitomizes – he always submits to superior opinions, easily at that, but, YOU MUST be armed with facts and figures.

After I retired from Civic Service as the Head of Service, His Excellency, (humbly not knowing what he saw in me though), appointed me as his Executive Assistant on Administration. In that role, I’ve enjoyed somewhat of a more relaxed relationship with him. From this vantage point, I saw a man who stops at nothing, seldom sleeps, and who always goes in head and heart first, to make decisions deemed best for his state.

He raised the bar of governance in Oyo State, and I know he achieved this because like a gallant soldier, he had a clear vision, but more importantly, he had the attributes of brilliance, finesse and unmatched candor to bring his vision for Oyo State to life.

Ajimobi’s strides in leadership even goes beyond his own dear State but across the South-West of Nigeria and the nation at-large. This is testamemt of a Stateman fueled with a naked desire to get the best for his State and fatherland.

Like any forward-thinking and foundational-shift leader, “the present may not fully u understand him, but the future will appreciate him”.
Posterity, as it’s often said, will judge him right!

10 In Custody Over Students Clash In Ibadan