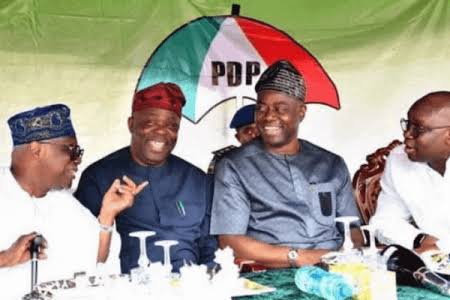 Competition is a good tool in human life to attest strength, love and capacity of individuals. It is not only unique in the world of business, but critical to all human endeavours. Whatever result or position an individual gets out of contest makes you appreciate such power and position because it didn’t come on a platter of gold. 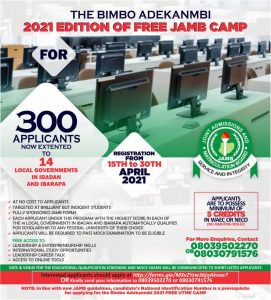 The atmosphere became tense day by day as congress approaches, it was a cold war between the two groups starting from internal crisis of the party in Oyo State under the leadership of Gov Seyi Makinde whereby some party leaders felt disappointed in the running of political events. There were several attempts to resolve the crisis, but all proved abortive until the last hour of intervention by the NWC which gave birth to the change of venue and date from Ibadan (Headquarters) to Osogbo, Osun State for Monday, 12th April, 2021.

Build up to the zonal congress, Gov Seyi Makinde had been quoted with a phrase of “dare consequences” if the congress did not hold on the 10th of April in his state, Ibadan as earlier scheduled. This generated more interest from both the Fayose led group and other political parties in the state with a calculation of welcoming the number one citizen of Oyo State to their party. In one of Mayors’ Radio Program on Fresh FM, Mr. Dare Adeleke was asked, “What did Gov Seyi Makinde meant by ‘dare consequences’? Dare Adeleke, an experienced politician could not answer the question but introduced another subject as a reply. The other side had taken advantage of this and hammered on what the Excellency want to do other than leaving the party. Alhaji Bisi Olopoeyan who had been on loggerhead with Gov. Seyi Makinde even before the zonal congress would not change his mind from supporting Dr. Eddy Olafeso. According to him, it was a gentle man agreement had between them, this was not hidden to anyone as he hosted Olafeso’s team in his Bashorun country home, Ibadan.

This led to Gov. Seyi Makinde through the State Exco suspending Mr. Taiwo Iyiola {Ibadan North East PDP Chairman}, who was present in the meeting. This was used to threaten other Local Government Chairmen who would object the stand of Governor, remembering the car gift and monthly salary from His Excellency, Gov. Makinde, they all retraced their steps and keep a distance to the aggrieved leaders.

This is the law of “use what you have to get what you want”. After series of political moves and constitutional references, the Chairman was reinstated as the NWC holds the authority to suspend any party chairman, but the deed had been done and aim achieved. Would Gov. Seyi transact or meet the suspended and reinstated chairman again? Would he continue paying him salary or trust his return knowing where he stands? Your guess is as good as mine. However, does that mean the suspended chairman would not get the reward of his loyalty again? A man may loose 10 million naira he had gathered for 30 years of his life in just a year, but he can regain his lost as well in a couple of month when the turn around comes.

The long-awaited day of April 12th came, Osogbo hotels smile to naira as rooms were booked and hotels were completely bought for 24/48 hours without any external man lodging there for that period. Prior to the day, screening committee led by Sen. Dino Melaye had arrived Osogbo for necessary scrutiny of candidates. Zonal congress eve recorded a few men deployed to Osogbo from Ibadan in different commercial vehicles. This first looked like all the delegates for zonal congress were coming from Gov. Seyi Makinde’s Agodi government house as the troop was led by his keen man, Alh. Mukaila Auxiliary. Mr. Auxiliary is an appointee of Governor Makinde, the current chairman of PMS Disciplinary Committee of the Ministry of Works and Transports. The position is equivalent to that of a NURTW Chairman even though the union has been suspended in the state. There were threats from the men as they occupied the venue of congress, parked their vehicles in front and fully ready to support Gov. Seyi Makinde and Amb. Arapaja with all their strengths. It took the men of military and Commissioner of Police, Osun Stete to send them away from the venue to give access to the real delegates, not thugs. Mr. Auxiliary in a short video clip that went viral on social media threatened to kill former Governor Fayose and Bisi Olopoeyan. Two boys of Mr. Auxiliary were arrested by Gov. Fayose’s side and handed over to the state CID. In a return attack, some men of NURTW men who had come to Osogbo for their National meeting were also arrested with a team of policemen attached to Governor Makinde, picked and naked them. Though, they were all released later.

There were a lot of issues raised by Hon. Mulikat Akande Adeola on Oyo State delegates list, stating that this man is dead, dead, sick, sick, aged and so on. Unfortunately, the electoral committee would just listen but wouldn’t take any action. Those that were sick or aged were represented by Gov. Seyi Makinde’s men to vote on their behalf, like Chief Adeojo and so on. This among other irregularities were considered a ‘constitutional aberration’ for the party but accepted for the sake of peace. Chief Bisi Olopoeyan was accredited but could not cast his vote based on the intelligence report gathered, he decided to let the sleeping dog lie and avoided the crash that could lead to loss of lives.

There is nothing that has a beginning without an end. SW PDP Zonal congress came and gone like any other one but what remains is the party, the unity of our party should not be toyed for anything because we remain the best alternatives. Not minding the irregularities, shortcomings that befall the electoral process, the leaders must harmonize everyone. Having declared the winner, Amb. Taofeeq Arapaja and accepted by the other side, there should be a strong reconciliation process that would genuinely settle the long crisis rocking the party at all levels if we must win elections. Any right-thinking person would know that there is a display of strength from former Gov. Fayose’s side judging from the result. This shows that there is a need for togetherness and oneness in the party if we must go for any electoral battle. It should be noted that the election had come and gone.

Zonal executive does not have any special power in the party without working hand in hand with the state exco. Only 12 of them or so would participate at the national level while the NWC remains the most powerful organ of the party. A zonal chairman has no constitutional right of hand picking the state chairman of the party or organize a state congress, it will be done by the National Working Committee just like we had in Osogbo. In fact, Ogun and Ekiti states would not have state congress until 2024 or thereabouts. The states that would have it will be coordinated by the NWC, not the zonal executives. Zonal executive committee is an organ that oversee the affairs of the party in the zone and gives report to the NWC. You can relate the channel with that of Police sector whereby you have DPO, Area Commander, Commissioner of Police, AIG, DIG and to the IG office. You can always get to the IG if you felt something is wrong at one level or the other. Meanwhile, one cannot do without the other. The notion of some members that the zonal chairman would hand them party ticket is a futility. It is not done like that and he has no power to do so but the state delegates and mostly, the NWC. The NWC can handover party tickets to individuals they feel could win elections for the party based on recommendations and integrity of such. They can decide to give an automatic ticket to a serving governor, senators, honorables and defected serving honourables too without any rancor.

While I believe that what brings us together should not separate us, we must put sentiments aside and forget the shortcomings of anyone but channel our energy towards winning elections for the party. It is imperative for the newly elected chairman, Mr. Arapaja to display his intellectual work from home by resolving the crisis rocking the Oyo State PDP. If this is done, I can tell you that other parts of the zone would not be problematic for him. I believe the first assignment he has is resolving the crisis before concentrating on how Osun and Ekiti elections would be won.

There should be a stakeholders’ meeting whereby all would be given fair hearing and prompt actions on their demands. Governor Seyi Makinde should embrace all irrespective of differences, he should recollect the days when all was good and fine between them.

Governor Seyi Makinde should appoint more politicians to his government as a compensation to their good work during his electioneering process.

There should be a total review of the forthcoming Local Government Chairmanship and Councillorship election in the state whereby stakeholders can have a political knowledge of their constituency.

I’m Luckier To Be Olubadan After 36 Years On Queue –…