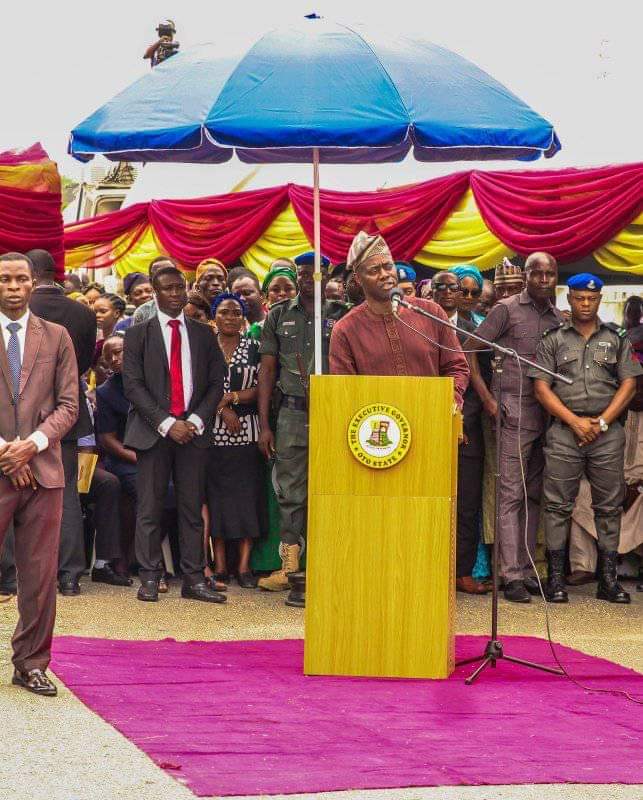 This writer once wrote a piece on impatient governors-elect and there were Emeka Ihedioha of Imo State and Seyi Makinde of Oyo State. Just after they were declared governors-elect, they were issuing orders to banks and civil servants not to obey serving governors. I reminded them that as governors-elect they have no constitutional powers. And just yesterday after being sworn-in, these two governors are in the eye of storm for the wrong reason.

Governor Emeka Ihedioha of Imo State gave orders today that the 40 feet huge Akachi Monument in Owerri be pulled down because it was erected by former governor, Owelle Rochas Okorocha. Governor Seyi Makinde of Oyo State has said that elected local government council chairmen should leave their offices and hand over to the most senior civil servant. These two moves are wrong and the streak of impatience and overzealousness is running in their veins. My Isoko people have a saying that a newly married woman should not be in a hurry to know her kitchen for she is going to spend most of her married life there. These two men have four years each at their disposal

I am really surprise at the haste in which Ihedioha is embarking to dismantle Okorocha`s legacy. Let me make one point clear here. I am not an advocate for Okorocha for the man is capable of defending himself. My duty as a journalist is to defend the underdog and lambast wrong steps by those elected by the masses. The Akachi monument was built with the tax payers money with due approval from the Imo State House of Assembly. It is possible that the money for the monument was in the budget, the most important law of the State House of Assembly. Ihedioha may not like the class of Okorocha but he must live with the political reality that Okorocha was a governor of the state. What is Ihedioha going to do with roads and other social amenities constructed by his predecessor? What of the picture of Okorocha hanging in Government House, Owerri as a former governor? This is political pettiness carried too far. I call on citizens of Imo State and civil rights activists to take Ihedioha to court for destroying government property.

As for Makinde of Oyo State, he is treading a slippery constitutional ground. The local council chairmen were elected by the electorate, the owners of electoral sovereignty. He may not like the way the council elections were conducted but he must accommodate them as elected representatives of the people. His behavior is a throwback to military dictatorship. It is not enough for the council chairmen to say that they would not vacate their offices. They should approach the court and test the constitutionality of the governor`s action. Would Makinde be happy if Buhari removes him as elected governor of Oyo State? I am aware that most state governors who criticize INEC on conduct of elections cannot conduct credible elections in their states. Constitutional lawyers, civil rights activists and the media must rise to defend the tenure of councils as passed by the State House of Assembly. We must remind our governors a la Ihedioha and Makinde that they are not imperial lords and must operate within the framework of the 1999 constitution which they swore to uphold.