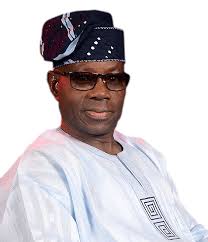 For a clarify and education on July 29th Appeal Court verdict which saw Gbolarunmi’s camp rejoicing as a winner, Senator Kola Balogun through his Special Assistance on Media has issued a press released, described Gbolarunmi and his followers as dreamers waiving to a flew plane.

S.A Media to Senator Kola Balogun,
Mr. Rotimi Johnson Ojasope in his released cautioned those people parading themselves as winners, by fabricating lies to keep their followers in perpetual captivity and false hope. He pointed out that the appeal court ruled in favour of Senator Balogun, said it is a verdict that complement the tribunal judgment.

” It has been brought to our notice that some unscrupulous elements and pathological liars are going about confusing the good people of Oyo State and Oyo south senatorial district in particular about the outcome of the Appeal court won by Senator Kola Balogun. They are parading themselves as winners, fabricating lies to keep their followers in perpetual captivity and false hope. Gbolarunmi’s suffers same fate as at the tribunal because the Appeal Court strikes out his case again.

” Our people must remember that these people were rejected at the pools for their lies, among other vices and the leopard doesn’t change its skin. That’s the same way they tried to scare people off the streets after Engr Seyi Makinde won the governorship election by spreading fake and pernicious news of assassination of some popular figures in Ibadan, thereby dampening the excitement of the victory. This is not an exception to their character but we want our people to be fully aware of their antics just like the Bible says we should not be ignorant of the devices of the devil, the father of all lies. The true position of the case is stated below:

” On issue 1 raised by the appellant that the matter was not statute barred before the action was instituted, the court of appeal held that the cause of action accrued on the 17th of November since that was the day INEC received the letter dated 16th of Nov written by PDP as admitting to hearing rumours or news on the radio about the substitution on the 16th of Nov by the appellant is immaterial at that stage and as such issue 1 is resolved in favour of the appellant.
The decision of the lower court is hereby set aside.

” However, the matter been a pre-election matter and time stipulated by the CFRN 1999 as amended has lapsed, the suit is hereby STRUCK OUT.

” Therefore, we want the good people of Oyo State to disregard their lies and rejoice because their mandate has not been stolen through the back door as the court of Appeal upholds the judgment of the Tribunal that strikes out Gbolarunmi’s case

Alli Felicitates Christians At Easter, Urges Them To Pray…