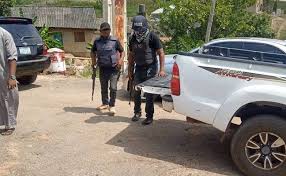 The Minority Leader, Hon. Ndudi Elumelu of House of Representatives and members of his caucus has condemned the attack on Suitorial Hotel, the facility housing Seyi Makinde the Governor of Oyo State and the Chairman of the Peoples Democratic Party (PDP) Campaign Council in the forthcoming gubernatorial election in Kogi State, by hooded persons dressed in police uniform.

The Minority Leader in a statement made available to journalists on Friday, Elumelu said, the house caucus are very disappointed on the attack on the Oyo state governor, claimed the opposition party have been trying to security personels to oppress opposition in Kogi and Bayelsa.

The caucus said the attack coming on the heels of the Wednesdays fatal mayhem unleashed on PDP governorship rally in Nembe, Bayelsa State, ahead of the Saturday election, portended great danger to the nation’s democracy.

According to the caucus, “we received with grave concern the news of the invasion of the hotel housing the Governor of Oyo State, Engr. Seyi Makinde, by hooded persons, who appeared in police uniform

“This development, which has been confirmed by the Commissioner of Police of Kogi State, Mr. Kakeem Busari, is particularly worrisome, coming on the heels of the Wednesday gun attack on PDP campaign rally in Nembe, Bayelsa, resulting in the death of many party faithful, is a clear indication that our democracy is in grave danger

“We condemn this brigandage, unprovoked assault, and act of intimidation in the strongest terms possible. Sanctity of the ballot box is the hallmark of democracy

Thus, these barbaric attacks can only be perpetrated by political villains and desperadoes bent on truncating the people’s will and robbing their mandate with the barrels of the gun

“The successive signals of violence emanating from Bayelsa and Kogi clearly show that the All Progressives Congress (APC) is not prepared for a free and fair election and is rather bent on visiting war on the peace-loving people of these States.

“We reject every attempt to turn the Saturday election to a festival of blood of the innocent. But we urge the people of Kogi State not to be intimidated or deterred in the struggle to establish their will at the polls”, the caucus stated.

It also called on the INEC and the security agencies to play by the rule in national interest, warning that anything to the contrary would be visited with the full weight of the law and legislature.

According to it, “the onus is on the security agencies to ensure that the people of Kogi as well as Bayelsa cast their ballots in a secure atmosphere free of all forms of intimidation, physical harm, and fear for their lives

“Let us also remind INEC and the security agencies that their conducts in these elections will be a subject of far-reaching legislative enquiry. They must, therefore, play by the rule and be at their professional best to ensure that the people vote and that their votes count”.

The Caucus also expressed solidarity with Governor Makinde, stating, “Our prayers are with Governor Makinde, PDP candidates, and the good people of Kogi and Bayelsa States; we nevertheless nurse no fears that the will of the people will triumph no matter how hard the vendors of violence, rigging, and political intimidation try”

Makinde To Pay Costs Of Flight, COVID-19 Test Of Stranded…

Attack On Fulanis By Igboho : There Maybe Counter Attacks In…