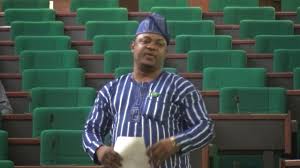 Oyo State Commissioner of Police, Mr Shina Tairu Olukolu, has said that the command, just two days ago, got a fresh information on the case involving the killing of a member of the House of Representatives, Honourable Temitope Olatoye, popularly known as Sugar, on March 9.

CP Olukolu, however, explained that the police would not divulge the information as investigation into the killing of the legislator was still ongoing, and that it was being handled by a higher police authority, with the support of the command.

The police boss stated this during the parade of suspected criminals at the state police headquarters on Monday, April 1.

Among those paraded was a suspected cultist, who had allegedly been linked to the killing of some members of a rival cult group, while also terrorising innocent members of the public in Ibadan metropolis.

The suspect, Chibuzor Nwanga (32) was arrested by operatives of the Special Anti-Robbery Squad (SARS) of the command, and he subsequently confessed to being the ‘CBN’ of Aiye confraternity, saddled with the duty of keeping the group’s weapons and other items stolen from members of the public.

Olukolu said the cult kingpin had been on the radar of the command for a while, “and on March 20, at about 8:00 p.m, operatives of SARS, led by the commander, CSP Olusola Aremu, arrested him following information on his whereabouts.

“The suspect confessed to have masterminded series of heinous crimes, including the killing of one Afeez a.k.a Afoo, who was a member of a rival cult group, Eiye confraternity, sometime in 2018, and two other Eiye members.

“Recovered from him were six mobile phones and criminal charms, and efforts are currently ongoing to arrest his other gang members who are at large,” Olukolu said.

The police also arrested a gang that specialised in dispossessing exotic cars from their owners at different parts of the state and taking them out of the state to sell.

According to the state police commissioner, the SARS team arrested the leader of the syndicate, Gabriel Olatunji, after one Saidi Eniola was attacked and dispossessed of his Toyota Corolla car at Iyana Church area of Ibadan by some armed robbers on March 17.

“Upon interrogation, Olatunji, who had been arrested on two previous occasions for the same offence, confessed to the crime, as well as series of other armed robbery operations.

Aside Olatunji whom the police commissioner described as prime suspect, four others were said to be receivers who were buying the vehicles from the armed robbers.

A total of 21 suspects were paraded by the police command, with Olukolu promising that the state would not be a safe haven for criminals.

Dapo Lam, Fijabi, Awoleye and other Non-Returning Reps to Receives N5,955,637.5 Each