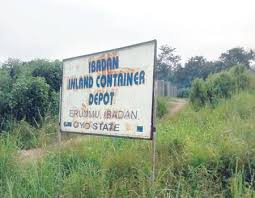 in an effort to decongest the Lagos port and speed up clearance of goods, the federal government had sealed agreement with China Railway Construction Corporation Limited (CRCC), to invest $250 Million On Ibadan Dry Port in Ibadan, Westerndailynews gathered.

Chairman of China Railway Construction Corporation Limited (CRCC), Mr Fenjian Chen, made it known today when he led a high-powered Chinese delegation on a visit to meet President Muhammadu Buhari in Abuja.

”  sum of $250 million dollars will be invested on a dry port in Ibadan, Oyo State, and it will decongest the ports in Lagos, and speed up clearance of goods by the Customs Service.

“Part of projects CRCC is undertaking include railway, dry port, free trade zone, and building of highways. About 40,000 more jobs are to be created from these.”

Aside from Erunmu dry port at Egbeda Local Government Area, Ibadan, Oyo state, the present government has also planned towards the actualisation of a new $134 million Ibadan Inland Dry Port with the presentation of Outline Business Case Compliance (OBC) certificate to Governor Abiola Ajimobi by the Nigeria Shippers Council (NSC) in first week of November, 2018.

The Governor Ajimobi new project was said to be sited at Olorisa-Oko, at the terminal end of the ongoing Lagos-Ibadan standard guage railway line, is a Public Private Partnership with the Nigeria Shippers Council, CRCC Construction Company and the Oyo State government as major stakeholders.