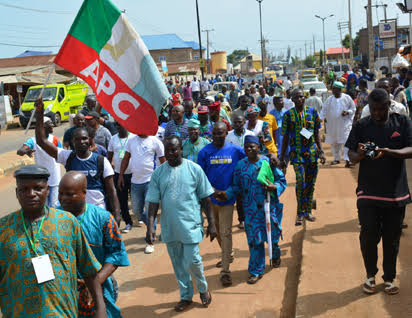 Oyo state All Progressive Congress ( APC ) on Monday has wrote the party at national and Comrade Adams Oshiomhole, the National Chairman of the party, urged to looked down on paper weight politicians who had flooded media castigating the right administrative process of the party, said they are the political jobbers looking for relevance after they had forced themselves out of the progressive family.

First and foremost, we use this medium to reiterate our unalloyed support for your leadership of our great Party and at the same time express our profound gratitude to all eminent personalities, particularly all APC Leaders from the South West and other leaders of substance who contributed immensely to the recent successful nomination of our Party Leader in Oyo State, Senator Abiola Ajimobi, to take over as the Deputy National Chairman (South) for the APC.

Going forward, we have been inundated with the nefarious activities of some opportunistic elements and fifth columnists who are now disturbing the media space with periodic tantrums in the name of attracting undue attention to themselves as political players. These political clowns would stop at nothing to rock the boat of Oyo APC from a distance since they are not part of the family again having left to join other political parties at different times. The latest in the series of their shenanigans is the unpopular stand on the nomination of Sen. Abiola Ajimobi for the post of the Deputy National Chairman (South) of our great Party. For some of them who were with us at one time or the other and those political neophyte being coopted into the script, it is simply an act of betrayal against the person of Sen. Ajimobi.

As it is not in our character to profile any funny character under our roof, we cannot always help the situation when it is “black sheep that comes forward to reveal his status as a slave within the clan”. The build-up to the crisis which engulfed Oyo APC in 2018 was the handiwork of some enemies within who were indulged for too long by the leadership of the Party. The few agents of ‘mutiny’ acted to destabilize and weaken the Party for the benefit of only themselves and some external forces without checks despite availability of damning evidence against them. No thanks to the magnanimity and the forgiving spirit of our Leader, Sen. Abiola Ajimobi who kept preaching tolerance.

In the end, the same divisive elements forced their way out but not until a sacrilegious plan to fractionalize was hatched and nurtured in what was called Unity Forum. The same promoters of Unity Forum partially succeeded in blackmailing the then Gov. Abiola Ajimobi, Chief Akin Oke, President Muhammadu Buhari as well as the national leadership of the APC in their bid to justify a plan to sabotage the Party in the 2019 general elections. They were able to get sponsors from outside the state and with heavy funding, they made spirited efforts to give the dog a bad name so as to hang it.

The then Minister of Communications, Mr. Adebayo Shittu, teamed up with serving federal lawmakers who included Sen. Monsurat Sunmonu, Sen. Adesoji Akanbi, Hon. Sunday Adepoju, Hon. Adedapo Lam-Adesina, Hon. Abiodun Olasupo, Hon. Taiwo Akintola, Hon. Olusumbo Olugbemi, Hon. Olatunbosun Oladele as well as the like of Alhaji Fatai Ibikunle, Isiaka Alimi, Engr. Raufu Olaniyan (now the deputy governor of the PDP government in the state), Dr. Kola Balogun (now a PDP Senator), Dr. Adebayo Adewusi, Prof. Adeolu Akande, Mr. Wasiu Olatubosun (now a Commissioner in the state under the PDP government) among others. Most of these people later joined the PDP, ADC or ADP and it is on record that they all worked vigorously against the APC in the last general election. Apart from Senators Akanbi and Sunmonu, all other renegade federal lawmakers contested against our (APC) candidates and lost woefully in the same election. Thus, they exposed themselves as lacking in electoral value.

Therefore, it is a height of immorality and shamelessness if this unscrupulous set of individuals can still seek to mislead the public by claiming to have any stake in the APC even when there is no record of their readmission into the Party anywhere after the conduct of the 2019 general election. Funny enough, some of them held on to key appointments as chairmen and members of Federal Boards as well as Heads of agencies of the APC Federal Government after cross-carpeting to PDP surrogate political parties. In collaboration with some external forces which sponsor their rebellion, they did certain harms which resulted in the loss of President Buhari in Oyo State during the last election though with a slight margin. But in the end, we still won Two of the Three Senatorial seats and Nine out of the Fourteen House of Representatives seats available to Oyo State.

Pointedly, it is very pathetic to note that the immediate former deputy governor (Chief Moses Alake Adeyemo) has eventually come out to identify with the group after months of denial and pretence. This is a man who enjoyed an unmerited opportunity of serving as the Number Two citizen of the state for unprecedented two terms of eight years even against the wishes of his own people. It was the same Sen. Abiola Ajimobi, who he (Adeyemo) is now fighting, that stood his ground and retained him as his deputy governor even when his loyalty and competence were in doubt. There were reports of his secret romance with some renegades and enemies of our great Party prior to the conduct of the last general election but Gov. Ajimobi kept indulging him for obvious reasons.

Without any strong clout, Adeyemo qualifies for a liability to any political party at his age as a septuagenarian. He lays claim to being from both Saki East and Orelope local government areas in Oke-Ogun axis of the state but he cannot boast of having a modicum of home support from anywhere. It is worthy of note that our Party lost two isolated (bye elections) conducted in his Constituency as a sitting deputy governor and indication later emerged that he was a bad influence in the said elections. He made a futile attempt to succeed his boss in Office at some points in 2018 but he had to withdraw into his shell when he saw the writing on the wall as he was personally convinced about his lack of wherewithal.

Your Excellency, it may interest you to note that Alhaji Fatai Ibikunle is another notorious character who can always trade any atom of integrity for pecuniary gains. He leverages on his being Personal Assistant to our late Leader and former governor, Alhaji Lamidi Onaolapo Adesina (Great Lam) to attract patronage and also mislead some people to his own advantage at will. He has been the Board Chairman of National Lottery Regulatory Commission since 2018 and he has never done anything to promote the interest of the APC. He was an arrowhead of the splinter group which later fused into ADC and his new party fielded a presidential candidate (Obadiah Mailafia) against our own President Muhammadu Buhari in 2019.

Ibikunle was an aspirant for Oyo South senatorial district under the same African Democratic Congress (ADC) in the last general election before he later received some money from Sen. Adesoji Akanbi and stepped down for him. However, this did not stop him from romancing the key opposition figures in the state such as Sen. Rashidi Ladoja, Sen. Olufemi Lanlehin, Sen. Monsurat Sunmonu, Engr. Seyi Makinde and Barr. Sarafadeen Abiodun Alli. There are strong indications that he is still in warm relationship with the present PDP administration of Gov. Seyi Makinde since all that matters to him is money.

Senators Adesoji Akanbi and Ayoade Adeseun do not qualify for any reactions from us on account of their being a part of the latest anti-Ajimobi plot. The duo had, at different times, got elected into the Senate on our platform but chose to pitch tents with opposition camps for no genuine reasons. Sen. Adeseun lost the PDP gubernatorial ticket to Gov. Seyi Makinde in the build-up to the last general election while Sen. Adesoji Akanbi was the ADC candidate for Oyo South senatorial district whose activities confused some poor voters to waste their votes on ADC’s presidential candidate as against their natural choice of President Buhari. As far as we are concerned, neither of the two former federal lawmakers is a member of Oyo APC at the moment.

In the same vein, Isiaka Alimi is the immediate former state deputy chairman of our Party. He is perpetually hunted by his fake claim of Oyo state origin and popularity. Highly self-centred, grossly incompetent and lacking in integrity, Alimi is overrating himself in the field of politics and we are delighted that he got exposed by events in the last 20 months. His desperation to be state party chairman led to his disgraceful exit from our Party in May 2018 and his next port of call was ADC. When he was unable to emerge the State Chairman of ADC, he quickly rushed to seek cover in ADP where he was completely relegated to the background. Another man in his category is Alh. Hammed Ayinla who eventually emerged the ADC state chairman but got impeached after a few months over allegations of financial impropriety and high-handedness.

Alh. Abu Gbadamosi, Goke Oyetunji and all others listed as members of the group have since returned to their individual status as political neophytes who would not learn any lessons or turn a new leaf after suffering effects of insincerity and divided loyalty. All they care for is the perennial peanuts coming from some external sponsors with Fatai Ibikunle as their contact person who never waste any opportunity to shortchange them. Also, characters like Alhaji Akin Olajide and Michael Lana could have featured in the plot to test waters of politics since the two men have never been known to be card carrying members of any political party in the past. One now wonders what stake they claim to have in the affairs of Oyo APC.

Your Excellency, the big regret we have concerning the several efforts they have made in the past is that we did not deem it necessary to reveal their true characters and identities to the whole world. Another one is about a number of innocent party members they brainwashed and misled into working against the APC in the last general election. Now, we say; Enough is enough! You cannot have your cake and eat it. APC is a Party with zero tolerance for indecent practices, indiscipline and sabotage.

Lastly, we reiterate our genuine confidence and unflinching support for your national leadership of our great Party while we also use the wonderful opportunity to applaud this choice of Sen. Abiola Ajimobi as the next Deputy National Chairman (South) of the APC. This letter is conveying the general position of all APC faithful in Oyo State as we remain committed to the cause of APC at all levels and Nigeria as a whole.

Kindly accept the assurances of our highest regards.