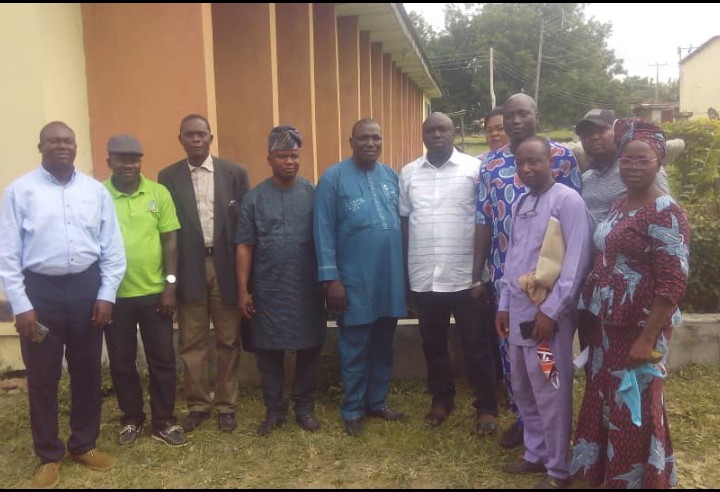 The Governing Council of Adeseun Ogundoyin Polytechnic, Eruwa on Thursday held her first meeting after constituted by governor Seyi Makinde.

The inaugural meeting of the governing council led by Dr S.O. Ogundiran also held a meeting with Joint Action Committee, JAC of the three union (ASUP, SSANIP and NASU) and student’s union body of the Adeseun Ogundoyin polytechnic, Eruwa.

In a bid to put the institution back on the path of accelerated development and academic excellence, the Governing Council held an Inaugural Meeting on August, 6 2020 at the Art and Design Conference Room, where it made an unanimous decision to speedily look into – as well as implement where necessary – the content of the Whitepaper report as approved and directed by the Oyo State government.

During the meeting, which also had the able representation from the three Staff Unions and the Students Union body, Dr S.O. Ogundiran, the Chairman of the institution’s Governing Council, expressed gratitude at the historic meeting since the expiration of the erstwhile Council in May 2019.

He further tasked the Council members to contribute their quotas in formulating meaningful policies that will bring growth and development to the Institution as well as unique transformation to the state’s educational sector.
The Council promised to perform the tasks before it within the ambits of the law establishing the institution. It also affirmed its decision to work with all stakeholders, that is, students, staff, Management, and the host community.

The major decisions reached at the meeting revolved around ensuring that non-accredited programmes of the institution are accredited, students are mobilized for NYSC exercise, substantive principal officers are appointed in accordance with due process, and the demands/requests of the Staff Unions and Student Union are looked into accordingly.

Following the Inaugural meeting was a meeting held by the Chairman, Governing Council with the Joint Action Committee (JAC), led by the State Chairman. Comrade Oyewumi. Dr Ogundiran conveyed the decisions of the Council to the Committee.

In response, Comrade Oyewumi reaffirmed that, the Committee’s resolve to work with the Council to ensure the institution reaps the benefits of good policies and leadership with the wherewithal to ensure uninterrupted academic calendar as well as proffer solutions to the lingering problems of the institution. He also charged the Council to bring into effect the NBTE Scheme of service.
In attendance also were the Director of Higher Education, Oyo State Ministry of Education, Mr Akanji and a representative of the Ministry of Finance. It was indeed a peaceful and a very successful maiden meeting of the present Council.

The Polytechnic Ibadan Is 50

COVID-19 : Oyo Farmers Cry Out, Lament Lack Of Access To…

Herders Who Fled From Oyo To Ogun Get Tough Conditions For…