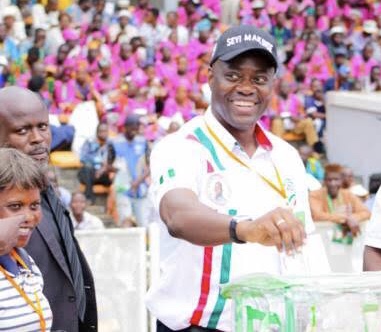 A group of Concerned members of Osun State People’s Democratic Party has accused Oyo state governor, Seyi Makinde of making attempt to tamper the results of Osun state Ward Congress through the set up appeal panel because the outcome of the Congress did not favour his friends in the state.

Concerned party members through the former party state chairman in Osun State, Alh. Gani Olaoluwa said, governor Makinde according to report had already liaise with the chairman of the appeal panel, Rt. Hon. Engr. Omoreige Ogbeide-Ihama to change the Panel’s report and cancel the Osun State Ward Congress in its entirety.

A press statement signed by Alh. Gani Olaoluwa on behalf of the Concerned Osun State PDP Members urged PDP national secretariat to note and act on Oyo state governor action as he has no power to order the cancelation of the Osun State PDP Ward Congress.

The Chairman of the Appeal Panel, in the just concluded Ward Congress of the Peoples Democratic Party (PDP) in Osun State, Rt. Hon. Engr. Omoreige Ogbeide-Ihama, spoke to some of our leaders on Saturday 2nd October 2021 and informed them that Governor Seyi Makinde of Oyo State, has Directed him to Change his Panel’s report and cancel the Osun State Ward Congress in its entirety, because the outcome of the Congress did not favour his friends in Osun State.

Hon Omoreige suggested, that our Leaders should reach out to Governor Seyi Makinde to plead with the Governor to  redirect him, otherwise he will have no choice but to recommend the cancelation of the entire  Osun State Ward Congress

The  PDP National Secretariat recently delegated a 5 man Ward Congress Committee with a Serving Senator as Chairman, along with over one hundred people from other states, who were posted to various wards to conduct the Ward Congress on Saturday 25th September 2021, which was very successful, and absolutely free of rancour and acrimony in all the wards across Osun State.

It is therefore very unfortunate that Hon Omoreige has displayed a Complete lack of integrity in the Performance of the Duty entrusted to him by the PDP National Secretariat. Hon Omoreige has been so hopelessly COMPROMISED that he resorted to pleading with two of our Leaders to find a way to see Governor Seyi Makinde and plead with him not to cancel the Osun State Ward Congress. WHAT  A SHAME !!! WHAT AN INSULT. A DISHONORABLE person like Omoreige Ogbeide-Ihama should NEVER AGAIN be given a Sensitive Assignment Such as this one, that requires INTEGRITY AND HONESTY.

Osun State is not Oyo State, Seyi Makinde is Governor of Oyo State and Not Premier or Governor General of South West Nigeria. Governor Seyi Makinde has No Authority, Whatsoever under the PDP Constitution to order the Cancelation of the Osun State PDP Ward Congress

We the Majority of  the Card Carrying Members of Osun State PDP,  stand by our successful Ward Congress Held on the 25th September 2021.

Governor Seyi Makinde has Obviously Bought DISHONORABLE  Omoreige Ogbeide-Ihama, But the Results of the Osun State PDP Ward Congress is Not for Sale.