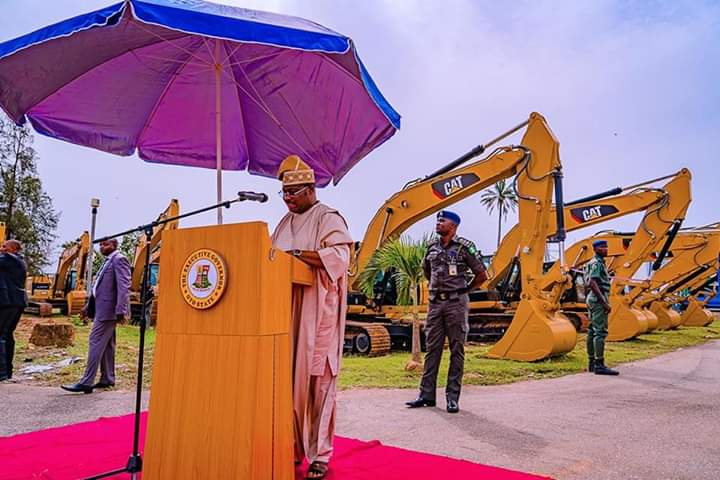 Governor Abiola Ajimobi of Oyo State, on Friday, described his achievements in the past 94 months as gigantic and will be a great challenge to be matched by the incoming administration of Mr Seyi Makinde.

Pointing to his strides in peace and security, infrastructure, education, agriculture, urban renewal, people’s welfare among others, Ajimobi said he could only hope that Makinde’s administration lives up to the challenge of raising the bar of governance from where he would be leaving it when he leaves office.

Ajimobi made these remarks while inaugurating 33 excavators for the use of all local government areas in the state, at the state secretariat, Ibadan.

He particularly urged supporters of the All Progressives Congress (APC) to shun being morose about the party’s loss in the last election, noting that whether PDP or APC led government, what was imperative was having a leader committed to driving the development of the state.

“Our administration’s strides will be a great challenge for the next administration as we have done well in all ramifications in eight years. The next administration has promised to do many things, so we will be watching what they will do. However, we can only hope they do well as we are all concerned about the development of the state,” Ajimobi said.

Speaking further, he vowed to work till last day in office, pointing out that more road projects will even be awarded next week.

Ajimobi referred to the excavators donated as evidence of his administration’s commitment to agricultural revolution.

Over the course of about eight years, Ajimobi said his administration had also donated 320 tractors, 30 mini refuse trucks and earth moving equipments.

In his remarks, state Commissioner for Local Government and Chieftaincy Affairs, Mr Bimbo Kolade said the excavators’ boasted of the latest technology in terms of its control, monitoring and operation.

He avowed that the excavators will help in rural integration, irrigation, demolition of buildings, road construction, among other building purposes.

Public Sector Manager of the contracting company, Mr Alex Nwoko, urged the state government to utilise the escavators’ monitoring ability for effective and central monitoring of the equipment to be deployed across the state.

Makinde To Begins Distribution Of Educational Materials From…