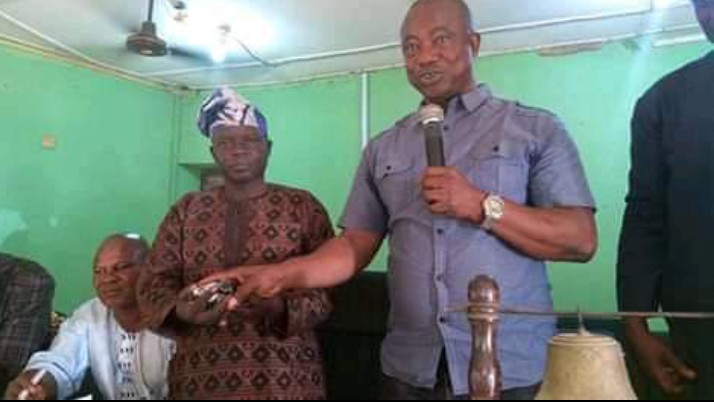 The Area commander of the Oyo State Police Command, Iyaganku Area Command, ACP Sunday Oke on Monday waded into the non-handling over Union’s properties in custody of immediate past Chairman of the Nigeria Union of Journalists (NUJ), Comrade Adewumi Faniran especially the account cheque books domiciled in three banks in the State.

The current executive led by Ademola Babalola had last Thursday raised the alarm over the suffering of some lecturers at the International Institute of Journalism (IIJ), Ibadan campus who were been deprived of their salaries since January this year by Faniran who refused the change of signatory form, to allow the incumbent sign allowances of the affected tutors.

The tutors at IIJ mostly veteran journalists had vide a letter dated July 9th, 2020 to Babalola and the Area Commander wrote on behalf of the resource persons at IIJ on prolonged delay in payment of their salaries by former NUJ chairman, Adewumi Faniran.

The letter signed by the duo of Mr. Ganiyu Waheed (for and on behalf of lecturers) and Mrs. Olawumi Adenubi, the Administrative Officer  said, “seven months ago, the NUJ elected Mr. Ademola Babalola Ismail as the new Chairman to run the NUJ affairs for another three years.

“Unfortunately, his predecessor, Mr. Adewumi Faniran has since then, refused to sign off as a signatory to the IIJ, Ibadan account, to pave way for the new Chairman, Ademola Babalola Ismail to sign the IIJ cheque.

“We are elderly retired journalists serving as lecturers to keep our bodies and souls together and impacting knowledge to upcoming journalists.

“Since the beginning of this year, we are faced with the agony of hunger and starvation. We shall therefore be grateful if you can use your good offices to appeal to Mr. Faniran to sign off for the new Chairman so that we can be paid. We pray we will not starve to death,” they appealed.

In addressing both Babalola and Faniran at the Command’s office Iyaganku, the Area commander said he could not force Faniran to release all the documents because of the court papers and hordes of lawyers who accompanied him.

Oke however cautioned Faniran to be mindful of posterity and be gentlemen enough to toe the path of honour by handing over all Union properties in his custody in the interest of peace and to avoid embarrassment.

Turning in Babalola’s direction, Oke admonished him and the executive to issue a disclaimer on the former chairman if he was not ready to heed his counsel,  because the police would not take kindly to any breach of the peace.

It will be recalled that the current executive led by Babalola reported the former chairman to the police to retrieve the documents of the council which include and not limited to the cheque books of the union, key to the chairman’s office, and other valuables.

Babalola said though his executive was not distracted by the shenanigans attitude of the former council chairman, but there was a need to pay the veterans who are teaching at the IIJ whom Faniran has been holding into ransome since January this year.

The police chief said the case referring to by the former chairman of the council did not restrain the national secretariat to conduct the December 18, 2019 election which produced Babalola and his executive.

He further advised the new executive to freeze the union bank accounts domiciled in three different bank namely, UBA, Access and FCMB, adding that there must not be vacuum in the union for the time the case is still pending in the court.

The police boss said; “there is no impediment against the election in this paper. The court did not give an injunction to restrain the election from.holding on December 18th.

“And even when it does, it would be so clear, unambiguous, concise, precise and straight to the point, but I have bot seen that in the papers you (Faniran) brought before me,” the police boss said.

Earlier, Faniran had told the police boss that he refused to release the documents in his care because he had initiated a case in the court by proxy and being the chairman of the union at that time, he would not drop the documents.

You Don’t Address Your Predecessors As Charlatans Akala…