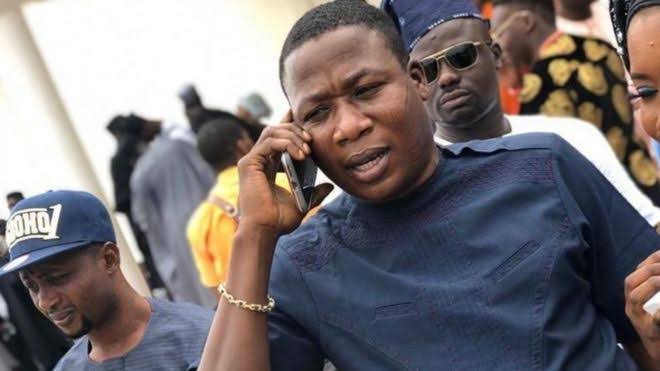 Yoruba Nation agitator, Sunday Adeyemo aka Sunday Igboho has assured supporters of his commitment to the Yoruba Nation struggle.

Igboho spoke during a conversation with the leader of the Ilana Omo Oodua, Prof Banji Akintoye and his deputy, Prof Wale Adeniran monitored by The Nation.

Igboho, while thanking his supporters after the recent conditional release, debunked various reports that he was down with health-related issues in detention.

He said that during his seven months of incarceration in the Benin Republic prison, he never fell sick as being erroneously carried about, describing those behind the “fake news” as uninformed.

Igboho,who spoke in Yoruba, thanked those who stood by him during his trying period, especially, notable Yoruba leaders, legal counsel and his wife as well as family members.

“I want to thank everyone, I want everyone to be calm. I won’t betray you all. This is me here. I’m fine, hale and healthy.

“Yoruba struggle will remain, and it will be stronger. Yorubas are suffering and smiling. They are killing, kidnapping and doing all sort in Yorubaland and we are not talking.

“I’m coming back home soon. I’m a true son of the soil. One cannot be scared of his father’s home. Nothing will happen and no one will be scared of anyone.

“When I get back to my base in Ibadan, I will thank everyone specially again. You will see me well. Dear Yorubas, don’t be scared, Igboho is back.”

While thanking president Talon, he said: “There were so many rumors, and that he (President Talon) collected money from Nigeria’s president, and has betrayed the Yoruba struggle. All were lies. Look at me, do I look like someone who went to Prison? Help me thank the president. I’m very strong, hale and hearty. All my needs were catered for while in prison.”

He stated there would have been no reason for agitation in Nigeria if the government had developed the country and protected the lives and properties of the citizens the way the government of Benin Republic had done for its people.

“If Nigeria was like Benin Republic, I would have not bothered myself with any struggle. Look at how Benin Republic has developed so well. I’ve been shuffling through Benin since 1996.

“For those seven months, there was no blackout and we never ran out of water. I was stunned. Foreigners are trooping into Benin Republic; the government is building infrastructure and the President is investigating the projects.

“The people of Benin Republic ought to appreciate God for the kind of leader He has given them. If we have such a government in Nigeria, no one will agitate. Citizens will be happy in a country where the government provides stable power supply, adequate security, and adequate water supply, because that is a good government,” he said.

Speaking on how he felt when they informed him of his release from prison, he said: “The day I was released, I was playing “Ayo” with an inmate, and a police came, he said “Chief come, where is your lawyer? He said call your wife and lawyer, your father is around (Baba Akintoye). President has released you.

“I was shocked and asked him to show me a document to that effect. It was written in French. It took the efforts of another inmate to interpret it and he told me I’ve been released and that was how I believed. When I called my lawyer, they told me they were on their way and were already aware of my freedom. I thought I was dreaming.

“The lawyers stood by me, and they said I should be calm despite the charges that they wanted to investigate against me.”