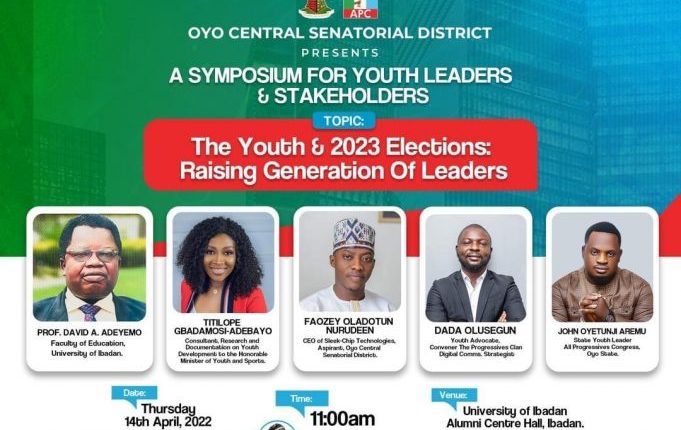 Social media strategist and public relations consultant, Akin Akinwale, is starting on a good note as youth leader of the All Progressives Congress, APC, in Oyo central senatorial district.

Next week’s Thursday, all roads will lead to the Alumni hall of the University of Ibadan, where Prof Adeyemo David of UI’s faculty of education; Titilope Gbadamosi-Adebayo who consults for youth minister on research and youth development ; Faozey Oladotun Nurudeen, a senatorial aspirant; Dada Olusegun who contested the APC national youth leadership; and John Oyetunji, the APC youth leader in the state, will be speaking on “The youth and 2023 elections: raising generation of leaders.”

According to the Olabisi Onabanjo University, OOU graduate, the programme billed to start at 11 am, was organized bearing in mind that “the youth occupy an important position in the life of any nation. In the political context, young people make up over 60 per cent of the entire population and about 70 per cent of the voting population. It is thus correct to describe the youth as the present and future of our dear state and country at large.

“Beyond constituting the majority of the voting population, we also have among us, people who have shown interest in taking up the mantle of leadership at all levels of governance.

“The only way to achieve this is through strategic collaboration and not distasteful competition. Just as the logo of our party expresses, we should endeavor to support one another as another election cycle begins.

“This symposium aims at encouraging young people to collaborate towards nation building and contributing to humanity like the Zulu philosophy UBUNTU implies,” the celebrated twitterati explained.