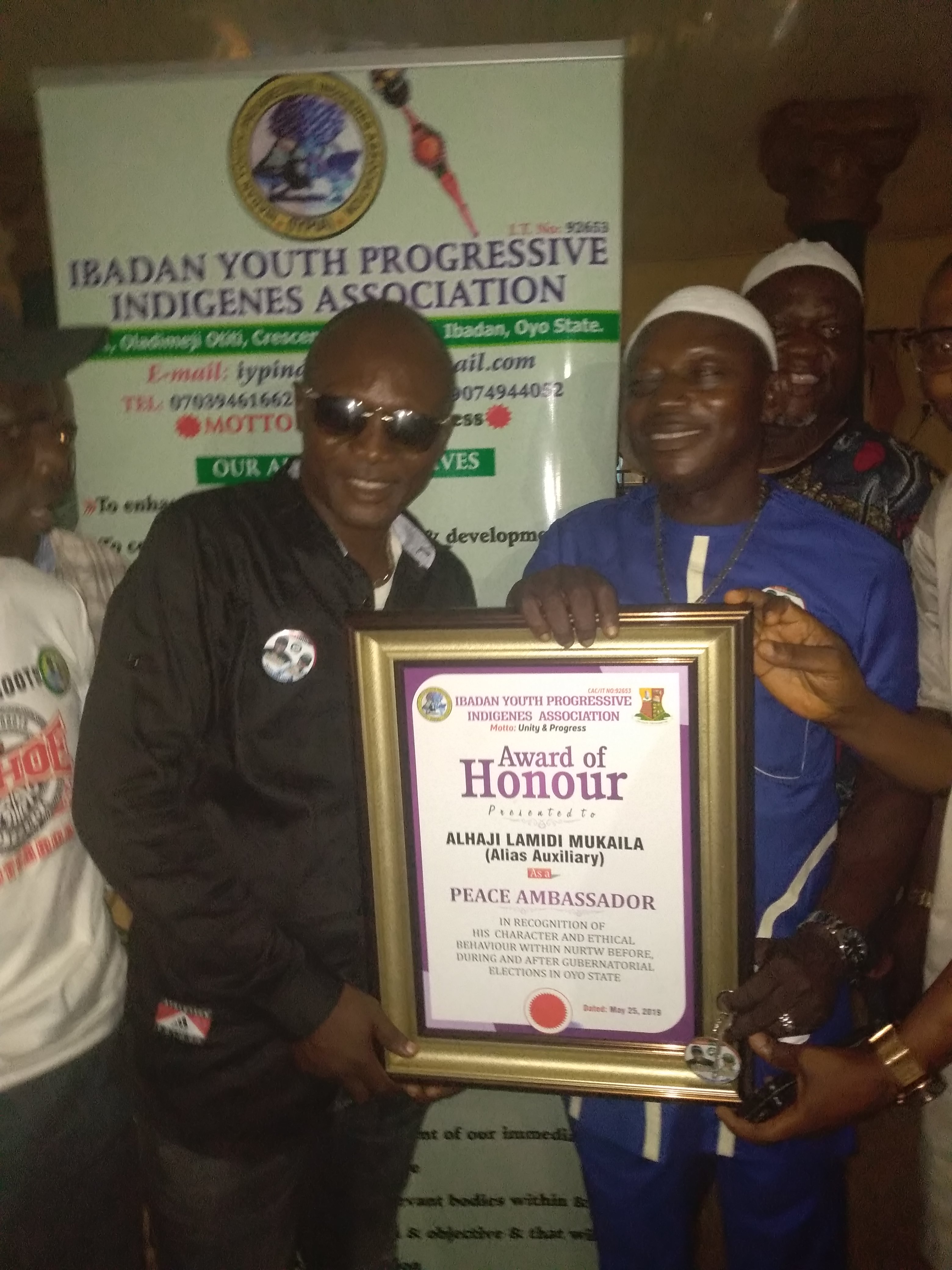 The Ibadan Youth Progressive Indigenes Association on Saturday 25th May has honoured the head of a faction of National Union Of Road Transport Workers ( NURTW ) in Oyo state, Alhaji Lamidi Mukaila (Auxiliary) as Peace Ambassador of the state, in recognition of his character and ethical behavior before, during and after the 2019 general election.

The Youths association, which comprises of youths from 11 local governments of Ibadan land described Alhaji Mukaila Auxiliary
and his team as a subscriber of peace in Ibadan and throughout the state.

In his speech during the award presentation, the president of the association, comrade Mudashiru Kamorudeen said, the 2019 general in the state is confirmed to be the most peaceful election conducted so far since the return of democracy. He further ascribed the 2019 violent free election in the state to standing aloof and political maturity of Alhaji Mukail Lamidi aka auxiliary as measurement.

” As concerned youths from Ibadan, before the general election, we paid visit to different groups and made a plea to remain calm and allow justice and peace to reign, NURTW factions inclusive. Even there was speculations that the camp of Alhaji Auxiliary are ready to cause unrest in the state so as to back up the governor elect during the electioneering but reversed was the cased, we got the reports and also witnessed those who unleashed terrors on our people before and during the election”

Reacting to his meritorious award, the former NURTW Boss appreciated the gesture and promised from time to time, to contribute to peace and security of Oyo State state.

” Am very happy that my Ibadan brothers captured my silent before, during and after the election, now it is glaring to our people that me and my boys are lovers of peace, we are not what people are tagging us to be, just that our opposition are using authority to molest us but thank God, the coast is clear, with the new administration of Seyi Makinde, we will all enjoy good governance in the state. I like Engr. Seyi, we have being together for long so it has always be my prayer to see him ruling the state, now we got a well deserved victory, it’s a prayer answered. I am ready to help the incoming government to fully restored security in the state” Alhaji Auxiliary added.

Alhaji Mukaila Lamidi Auxiliary was once an acting Oyo NURTW chairman after the assassination of his boss, Alhaji Salako Elewe-Omo.

It will be recalled the Central Council of Ibadan Indigenes ( CCII ) had earlier last month gave a merit award to the present State NURTW boss Alhaji Tajudeen Olajide Ejiogbe for a civilised and violence free leadership of the Oyo State NURTW in the past two years.

Re- Festus Adedayo’s “The Chickens Are Home To Roost”

Linking Me With Iwo Road Mayhem Is Another Ploy By Gov.…