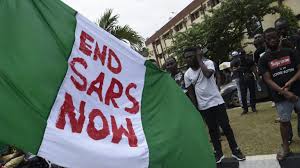 The father of a victim of Endsars protest, Mr Micheal Olatunde has requested for Ten million naira for the treatment of his son Gbenga Olatunde at the University college hospital Ibadan.

He made this plea before the Oyo State Judicial Panel of inquiry on police brutality led by retired Justice Badejoko Adeniji in a petition with number OYJPPB/93.

The victim Gbenga Olatunde a two hundred level student of Federal University of Technology, FUTA, was sitting outside his father’s pepper mill at No 18 Alabode compound, ojoo market on 20th October 2020 when a stray bullet hit his forehead.

During cross examination, the victim’s father,Mr Michael Olatunde presented receipts of the money spent at the hospital, as part of the exhibits, to the panel.

Mr Olatunde added that his son would be going for plastic surgery on his forehead.

After thorough consideration, the judicial panel told the father of the victim to compile all the receipts of the treatment properly.