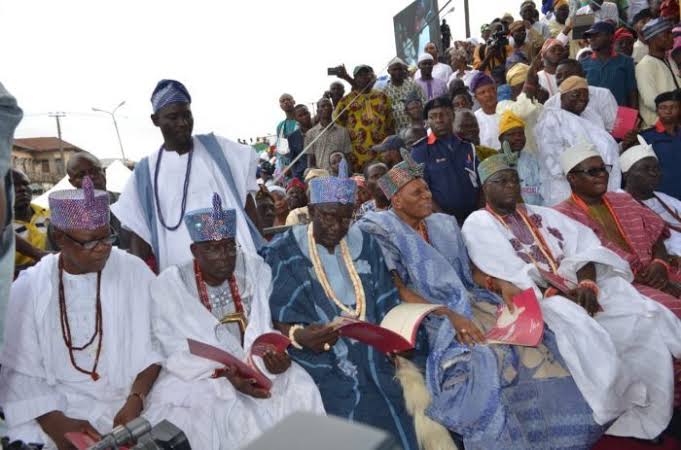 Gov. Ajimobi Elevation Of Baales To Oba In Ibadan, A Century Mission Accomplished

Only those who are mischievous and those that are not familiar with the facts and circumstances that led to the elevation of some Baales to Obas and the conferment of Obaship title on the hitherto High Chiefs will blame Senator Abiola Ajimobi.

The Gov has done the best for Ibadanland. The whole idea emanated or originated from the Ibadan Progresives Peoples Union( IPU) and it was approved by the Olubadan-In-Council under the immediate past Olubadan, Oba Odugade Odulana of blessed memory.

The Committe that he set up was headed by Otun Omowaye Kuye and had High Chief Femi Olaifa as Secretary, both now of blessed memories. It was only Balogun Olubadan, High Chief Sule Omiyale who dissented and voted against the amendment. All other members of the Council including the present Olubadan agreed to the implementation during the reign of Oba Lana.

Unfortunately, Oba Lana could not adopt and ratify the report of the panel then due to his very advanced old age. I concede that OYSG did not get its approach of the matter right , bcos all the Gov ought to have done was to ask the Olubadan-in -Council to meet and vote on the report. The majority of the Council would have voted for its ratification and adoption while the OYSG would just implement their decision.

Those who opposed and or criticised Senator Abiola Ajimobi over the matter are just being mischievous and or being politrickal and it is most unfair, callous and uncoscientous.
I was with the Gov at the Apapa residence of Otun Omowale Kuye when ( I think if my memory serves me right- High Chief Omiyale ) tansisited to glory.

The Gov went to check on Chief Kuye then who just sustained an accident on the course of Ibadan Golf Club. The Chief said (and I was there, Chief Mrs. Priscilla Kuye too was was there and Mama is still alive ), – “Biola(Gov), please and kindly save us in Ibadanland and elevate the status of our ranks who are members of the Olubadan-in-Council by confer on us the Kingship title that our report had already done and which is in consonance with what is contained in Chiefs Laws of Oyo Oyo State.
How sweet and refreshing would it have been if High Chief Omiyale had died as Oba Balogun of Ibadanland and I also became the Oba Otun Olubadan of Ibadanland.
Posterity would forever remember you and write your name in gold if you can do this for Ibadanland.
You, Ojo as the Attorney-General kindly come up with the position paper for your Gov on this and Ibadanland a si gbe e.

High Chief Omowale Kuye also died not long after as Otun Olubadan and not as the Oba Otun Olubadan of Ibadanland. Myself and the Gov regretted not being prompt on his request on this matter before he died. My other regret was my refusal to do Attorney-General under the second term of Senator Ajimobi because I would have been in the best position to offer the Gov and the Govt the best and sound advise on how to confer Obaship on all the High Chiefs without the attendant denegeneration and its consequences that we now face which allowed some people to make political capital out of best policy ever implemented by the father of the modern Oyo State, Senator Abiola Adeyemi Ajimobi, Koseleri 1.