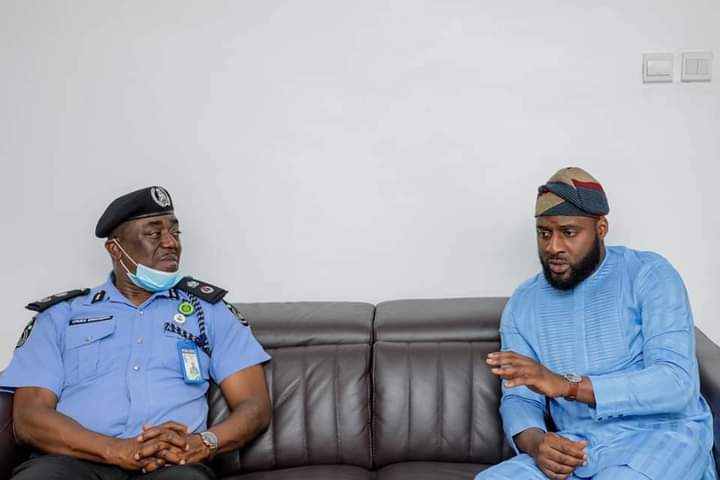 http://tuvillanueva.com/makvs27kto The Speaker , Oyo State House of Assembly, Hon Adebo Ogundoyin says the success of Amotekun Corps in enhancing the security of the state is dependent on the full support and guidance given to them by officers and men of the Nigerian Police.

http://grasshoppersoccer.com.au/bfb2u2r The Speaker therefore asked the Oyo State Commissioner of Police to extend full support to Amotekun Corps when fully operational in the state to enable them complement the activities of security agents in the task of reducing crimes in every nook and cranny of the state.

The Speaker reiterated this when the Oyo State Police Commissioner, Joe Nwachukwu Enwonwu paid a familiarization visit to him in his office at the Parliament Building, Secretariat Ibadan.

https://www.passion-outlet.com/ee84jma72 Hon Ogundoyin told the Police Commissioner that Amotekun Corps was not established to take over the functions of the Nigerian Police but rather they are employed to help the Police to gather information, engage in surveillance as well as help them to arrest suspects .

The Speaker said ” We understand the constraints of the Nigerian Police. We know they are understaffed and the job before them is overwhelming. But the Amotekun Corps will be deployed to all zones in the state where they will participate in the job of securing their communities and assisting the Police. They will arrest suspected criminals and hand them over to the Police “

https://paceptclinic.com/mlmcktwmx While assuring the Oyo State Police Command of the readiness of the State Legislature to work with the various Security Agencies since security is the joint responsibility of all, Hon Ogundoyin urged the Police to do more in the area of intelligent gathering and securing of the border communities in Oyo State.

https://slickforcegirl.com/2021/11/17/20nhr3p01c The Speaker used the medium to bring the issue of incessant Fulani/farmers clashes in some parts of Oyo State especially the recent the crisis in Oriire Local Government in Ogbomoso to the attention of Police Commissioner, and urged the Police to ensure perpetrators of these clashes are brought to book.

http://www.pigeons-france.com/uw93cm7mezx In his remarks, CP Joe Nwachukwu Enwonwu assured the Speaker that the Oyo State Police Command is ready to work with Amotekun Corps inline with the directive of the Inspector General of Police, IGP

https://www.aimilpharmaceuticals.com/nybrdketo Citing the bank robbery incident in Okeho some weeks ago, CP Joe Nwachukwu Enwonwu said if not for the locals the robbers would not have been apprehended.

http://salagala.cat/1masl6gj1 On the Farmers/herders clashes, the State Police boss who promised that his men will take proactive steps to arrest those causing the crises, blamed the spate of kidnappings, armed robbery and other heinous crimes perpetrated in some parts of the state on some Nomads who use their cattle as cover-ups.

https://www.social360monitoring.com/4u1crhpbo2 He said drastic steps will be taken to address the Oriire Local Government crisis and others like it across the state.

Kemi, A Trader In Oyo Town Accuses Husband Of Stealing Her Undies