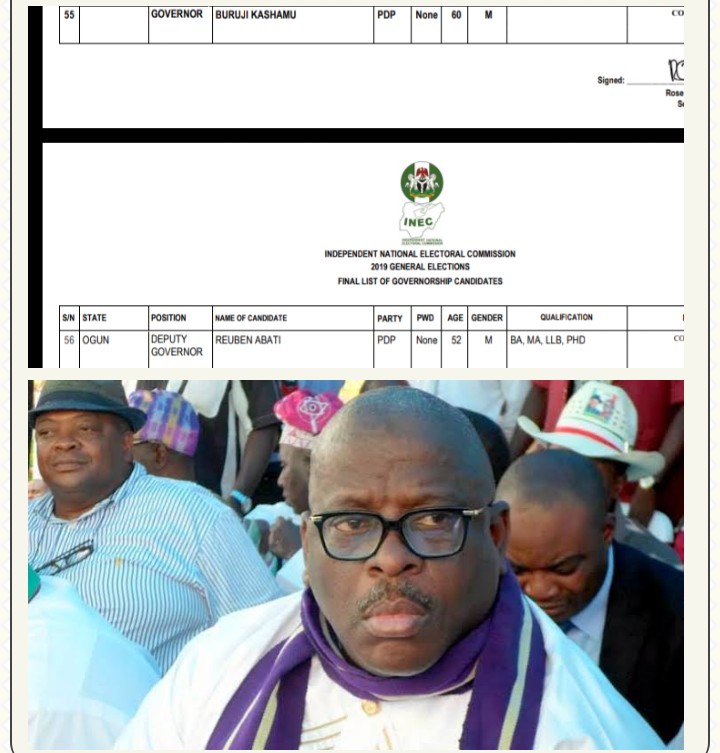 It was a jubilation galore in the camp of Ogun East district senator, Buruji Kasami as the Independent National Electoral Commission (INEC) has announced Buruji Kashamu as the governorship candidate of the Peoples Democratic Party (PDP) in Ogun state.

Westerndailynews got the approved lists of Ogun State governorship candidates yesterday with inclusion of Kasamu and omission of
Ladi Adebutu.

It will he recalled that, Ladi Adebutu and Kashamu had been at loggerheads over the governorship ticket of the PDP in the state with current situation of the  Court of Appeal of December 18, 2018 verdicts which mandate INEC to recognise Ladi Adelatu as the authentic governorship candidate of PDP in Ogun State.

Meanwhile, PDP has issued a statement warning INEC to reverse their decision and gives the dully recognitions to Ladi Adebutu as the PDP governorship candidate in Ogun State.

“The PDP cautions the Chairman of the Independent National Electoral Commission (INEC), Prof. Mahmood Yakubu, to insulate the commission from unnecessary controversies by immediately obeying the judgment of the Court of Appeal of December 18, 2018, and without further delay reflect Hon. Ladi Adebutu’s name on the ballot, in the interest of a hitch free and peaceful election in Ogun state.

“The PDP states that Hon. Ladi Adebutu’s name was duly and statutorily submitted to INEC after he won the governorship primary conducted by the National Working Committee (NWC), the only body empowered by law to conduct such primaries. The PDP has not substituted his nomination with anybody and such is not in our contemplation.”

Ib. Poly Student, One Other Jail For Internet Crime In…

Danbatta Condoles With Emirs of Kano, Bichi Over Mother’s…