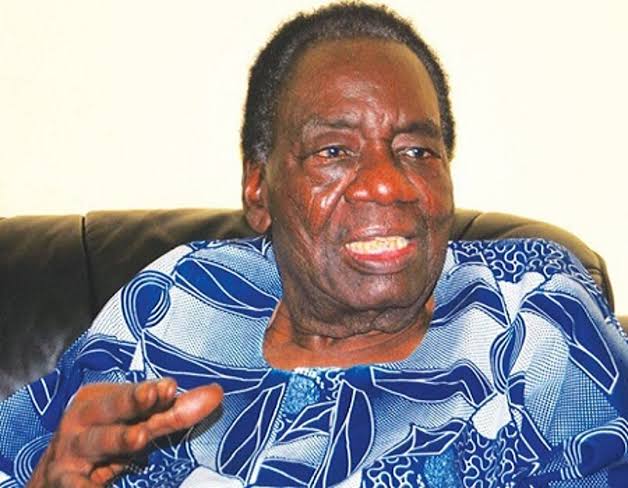 Personal aide to a former Minister of State for Federal Capital Territory (FCT), Oloye Jumoke Akinjide who was detailed to care her late father, the former Attorney-General of the Federation and Minister of Justice, Chief Richard Akinjide (SAN), Alhaji Ademola Adediran, has revealed that the father of his boss died because of lack of commitment from the doctors at the University College Hospital (UCH), Ibadan.

He said he personally took the 89 years old legal luminary to UCH, a week before his death but there was no doctor to attend to him.

Adediran, who said his principal asked him to always be with her father because of his old age and he was with him for many years, recounted his last moments with the deceased.

He said; “It is a pity we lost him. He was a man of honour and an icon. I was with him till 6:30p.m on yesterday (Monday). I got to this place by 7a.m yesterday. When he was eating his breakfast, I sat beside him. When he was eating his lunch, I was with him. Around 6:30p.m, I went to meet him and told him that I wanted to leave because the curfew would start by 7p.m. Then, he said okay. But he asked me to do a favour for him. He said all the trees in his compound, he did not like the way they have been growing, I should help him cut them. He asked about my wife and the kids and I left.

“So, after midnight, I received a call that he was unconscious. I had to rush down here, despite the curfew. We rushed him to UCH. On arrival, we were told he’s dead.”

Fielding questions on whether the deceased was sick prior to his death, Adediran said: “Like a week now, he had been feeling feverish. Then, we took him to UCH, but we were told that the doctors were not around and the stuff like that. They said we were going to do COVID-19 test before they could administer any treatment for him. Unfortunately, it was in the midnight too; it was the night of Friday to Saturday. They gave us a kind of prescription for the drugs that we should use. We went back home and we started using the drugs for him. He was okay. But it was a pity he left today.”

When asked if Akinjide had travelled outside the country recently or received visitors that just came back from abroad, Adediran answered: “He had been in this Ibadan for some years and he had not left Ibadan for the past three years. He did not also receive any visitor from abroad. I have been the only person that has always been with him in the morning, afternoon and night.

Asked how Oloye Jumoke Akinjide received the news, Adediran stated: “In fact, I broke the news to her. She felt so bad. But there is nothing anyone can do about it. Immediately I told her on phone, she kept quite for some time and later picked up again, and told me: ‘Demola, go and arrange mortuary for him.’ She is in Abuja and because of this lockdown over COVID-19, she could not come to Ibadan now.

Rev Peter Akinjide, the Mogaji of Olugbon of Ile-Igbon, Iyana-Offa, Lagelu Local Government, Ibadan, who is a cousin to the deceased, also said the burial arrangements would be announced by the biological children of the departed legal icon.

He was a member of the judicial system’s sub-committee of the Constitutional Drafting Committee of 1975-1977 and later joined the NPN in 1978, and in the same year, he became the legal adviser for the party.

Akinjide was born in Ibadan, the capital of Oyo State in the early 1930s. He was a student at Oduduwa College, Ile-Ife before he travelled to the United Kingdom in 1951 for his higher education. He was called to the English Bar in 1955 and later in Nigeria. He also established his law chambers, Akinjide & Co thereafter.
The spokesperson of the UCH, Mr Toye Akinrinlola told reporters in Ibadan that the family of Akinjide should bring prove that the former minister was brought to the UCH a week before his death.