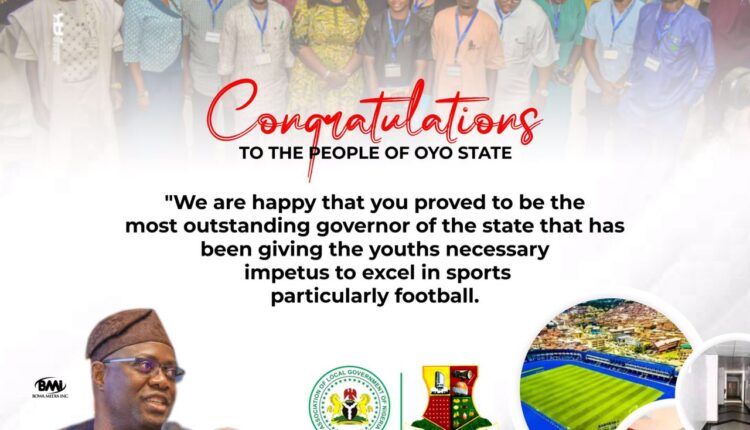 All the 33 local government chairmen in Oyo State have lauded Governor Seyi Makinde for his various strides and imprints in the State, especially on the remodeling of the Adamasingba Stadium, Ibadan.

The chairmen under the aegis of Association of Local of Nigeria(ALGON), Oyo State chapter dropped the commendation in a statement made available to journalists in Ibadan, the Oyo State capital by the association’s Publicity Secretary, Hon Sahib Oladayo Yusuff.

Yusuff specifically pointed out that the latest on sports is landmark and milestone.

According to the council bosses, Governor Seyi Makinde out of his many, reeled out the various achievements of his administration in the sports sector.

They  therefore expressed delight that, the state was now the better for it, locally and internationally, including football where it is more famous now with the just commissioned remodeled Adamansingba stadium and sports complex.

“We are happy that you proved to be the most outstanding governor of the state that has been giving the youths necessary impetus to excel in sports particularly football they averred.

They also applauded the  governor for his unrelenting efforts in developing the game of football in the state, with the Commissioning of the newly remodeled Adamansingba stadium and multi purpose sporting complex to international standards.

One Dead As Hoodlums, Vigilante Group Clash In Shasha,…