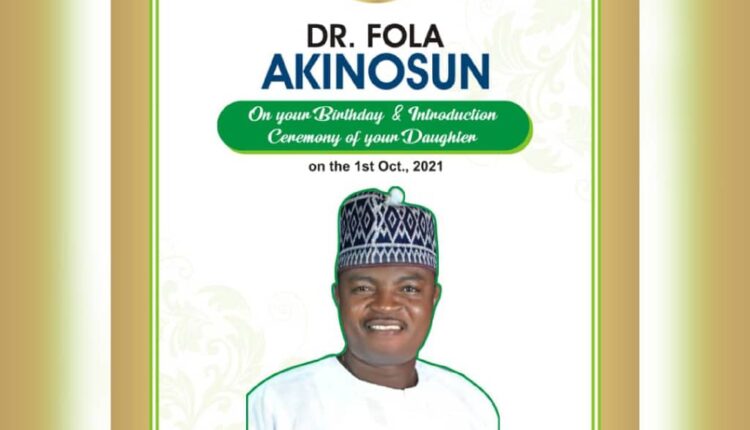 A formidable political group in Oyo State also known as Omo Akin Gbasibe Political group has congratulated a chieftain of the All Progressives Congress APC in Oyo State, Dr Fola Akinosun for the grace of God to witness another year on earth, in good health and in Gods mercy.

The group in a statement made available to newsmen in Ibadan, described the Oyo south senatorial hopeful as a special breed from God, who was made with great potentials, wisdom, intelligence and compassionate spirit.

The group expressed gratitude to God for allowing Dr Fola Akinosun, whom they described as a philanthropist and lover of the less privileged, to celebrate another birthday, with a new year full of purpose, fulfilment and impact.

It says the group is happy to identify with the man of the people and the son of the soil who yearly celebrate his birthday on the 1st of October, the day Nigeria gained its independence.

It said Dr Akinosun’s birthday being celebrated on 1st of Oct, was divinely ordained which showed in his commitments to his country in general and Oyo state in particular.

The political group pointed out that Dr Akinosun has been known for touching lives in unique ways.

While congratulating the great man of honour and wisdom, omo Akin gbasibe political group prayed that the Almighty continue to grant Dr Akinosun long life in good health and wealth.

It also prayed God to bless him with sufficient grace and mercy to accomplish his political desires and to record more milestone achievements in his lifetime.