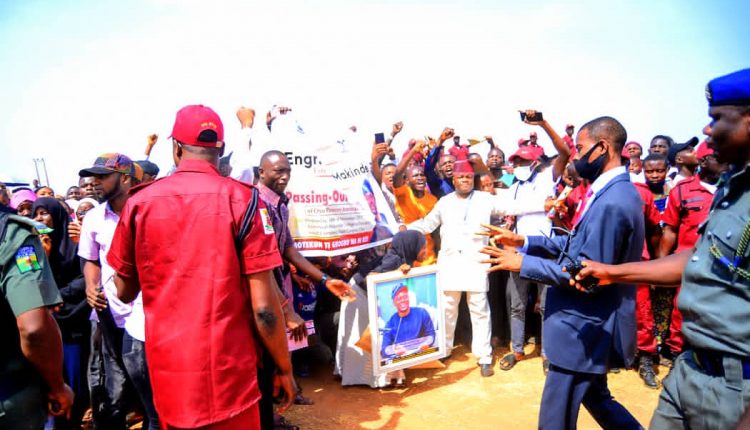 The Students’ Union President of Emmanuel Alayande College of Education in Oyo has reacted to the action of the State Governor, Engineer Oluseyi Makinde while he visited the college premise for the pioneer passing out of the one thousand and five hundred Amotekun corps.

https://www.passion-outlet.com/ua241ne6s Comrade Sofiyulahi Adeola Cytoplasm made this available on his social media handle on Thursday while reacting to the Governor action calling it inpatient and therefore the students populace frowned at it. He said, “a man of the operation burst in army uniform even slapped me all because I want to address the Governor”.

The Union President therefore call on politicians to be attentive to students and youths not only during election periods. He made it clear that they are not after the money the Governor will give to them but just want to have one on one interaction with his excellency which they were denied.

STUDENTS SHOULD BE USEFUL TO THE SOCIETY AND NOT TO BE USED AS POLITICAL MACHINERY.

I found it displeasing to address the crew on a mind blowing issue causing the grief in the heart of many. Thus, the students’ populace and youth should be well recognized not only in time of election but during the era of discharging duties.

The act and decision of the Executive Governor of Oyo state, Engineer Abiodun Makinde on November 18th 2020 at the passing out of the Network Security Agency codenamed AMOTEKUN corps which was held in our prestigious college, Emmanuel Alayande College of Education was so shocking and unacceptable by the entire Students, this gave the entire Students of the College bad hope and unfavourable attitude to the students community.

http://salagala.cat/gwgt0nv70 However, it is well known that Students are only recognized during the cause of election and series of promise will be made which will not be fulfilled when discharging duties.

https://www.aimilpharmaceuticals.com/eeyjvb6e The EACOED Students academic program was suspended, Students Union leader maltreated and humiliated which led to serious issue but still yet, we agreed the continuation of the training all because we want to welcome and explain the plight of the students to the Executive Governor of Oyo State, it sound ridiculous and unwelcome that the Governor did not even recognize the Students in a minute not to talk of listening our plights.

We cultivated love for the Executive Governor of Oyo state, we allow our most vulnerable and powerful selves to be deeply seen and known to everyone, what we actually expect to regain is a reciprocate of our love for him, but yesterday, the students felt embarrassed, harassed and intimidated in the presence of Governor.

https://www.social360monitoring.com/fqj5fh64 Sometime, love is not something we give and get; it is something that we nurture and grow, a connection that can only be cultivated between two people when it exists within each one of them we can only love others as much as we love ourselves ( Àpólé sá laraánfé)

Shame, blame, disrespect, betrayal, and the withholding of affection damage the roots of the love we have for you Engineer Abiodun Makinde. The love can only survive if they are acknowledged, healed and rare our respect back to us.

In lieu of this, the entire students populace frowned to the impatience of the Governor of Oyo state, this triggered us to demand for our privilege which was denied by the Governor of Oyo State, Don’t see us as machetes that can only be used and abandoned during the cause of election, we are rare gem, 2023 is knocking.

http://salagala.cat/rtkpfboow1g How To Check 2021 WAEC Results Via Text Message