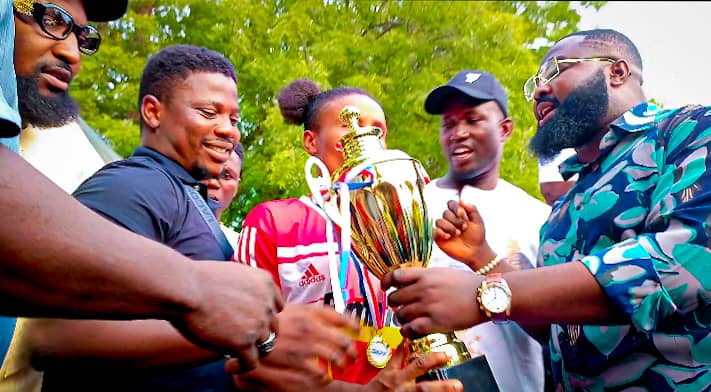 Dominic Akinjide in rememberance of his late father had earlier visited Olugbon Medical Center in Igboora, where he donated cash for treatment of some patients at the hospital.

Dominic Akinjide Fagbemi Foundation (DAFF) is a non-governmental and non-political organization aimed at projecting Ibarapa region to the world by identifying talents and making people of the region achieve their full potential through series of initiatives ranging from sports, education, scholarships, seminars etc.

The sports festival started in Igboora on February 26, 2022 and ended Sunday, March 6, 2022, it featured football matches and athletics, followed by Ayo Olopon and Draft. No fewer than 16 football teams from Oyo State, Ogun, Lagos and Edo participated in the held sports competitions.

Oyo State Commissioner for Youth and Sports, Hon. Seun Fakorede was part of
dignitaries that graced the final football match which took place at Igboora High School playground, watched by large of spectators.

Fakorede said the present administration in Oyo State led by Engr. Seyi Makinde is committed to identifying talents among the youth and that Ibarapa sports festival could serve as a terrace to achieve that, so in a bid to constitute Oyo State female football team, 5 best performing football players at the Ibarapa Sports Festival will be part of the state team.

For the final of the football match Young Talent 99 FA defeated SGH Amazon 4 goals to nil to lift the trophy.

The most promising talent award of the competition went to both Shogunle Taiwo and Shogunle Kehinde from Igboora High School, Igboora.

Most upcoming team of the competition was also won by Igboora High School Ladies football club.

At the end of the final female football match on Sunday, the 5 female players were selected as promised by the Commissioner for Youth and Sports, Hon. Seun Fakorede.

They were: Orji Beatrice (Igboora), Afolashade Adebayo (Igboora), Ola olaronke (Sango Ota), Jumai A (Igando). Franca Azonto (Lagos). They are expected to join the about to be constituted Oyo State football team

However, community developers, opinion leaders and social media commentators in the region have continued to extend their appreciation to the founder of Dominic Akinjide Fagbemi Foundation, Dominic Akinjide for the initiative they described first of its kind in Ibarapa land.

According to Mr. Akinyemi Akintayo who is a lecturer and advocate of good governance, “Ibarapa Sports Festival is an enviable innovation and blessing to us in Ibarapa. I have to suspend my engagements for the day to witness the unique sports festival.”

“Jide Dominic Fagbemi has been able to convincingly challenged our political office holders and bigwigs in Ibarapa that charity begins at home and no amount invested in humanitarian services is a waste.”

“Congratulations to us in Ibarapa for giving us Jide, God will continue to guide his missions and bless him. Personally, I am so proud of him,” he said.

Akintayo also suggested that subsequent outings should be among indegenous female football teams in Ibarapa. This, according to him, will further explore many talents in Ibarapa land.

He, however, called on all well-to-do individuals, including political office holders in the region to emulate Dominic’s selfless way of life.

Answering questions from the news men on Monday, Tokunbo said “the festival has really established the fact that we are family and we need each other and it shows that we have responsibility to one another for peace and happiness of others.”

“Kudos to Akinjide and DAFF team for a well coordinated programme. We definitely need more of this to keep our bond of togetherness,” he said.

Mr. Owolabi Samod Kehinde who is the Coordinator of the all-important sports festival, on Monday, expressed gratitude to those who made it to Igboora High School venue of the sports competition.

According to him, “our aim is to promote and educate our girls in Ibarapa land and Oyo State at large through sports.

“We really appreciate our local government Chairman, Hon. Adedoyin Adeoye, Hon. Tokunbo Adewale Toriola (Toks), for his unflinching support all the time and many other individuals from near and far.

Kehinde, however, reiterated that his principal, Dominic Akinjide Fagbemi “is committed to creating a platform where Ibarapa Indigenes, in respective of their gender, can mingle with sports professionals from other states of the federation thereby putting Ibarapa region on the map.”