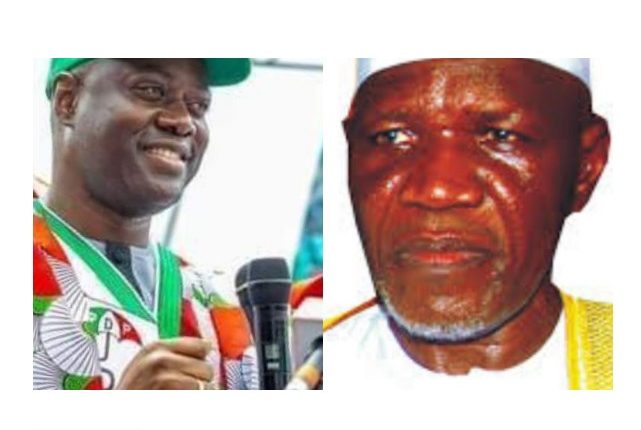 The People’s Democratic Party (PDP) Oyo state chapter has described comments credited to Sheikh Muhydeen Ajani Bello over the present PDP government under Governor Seyi Makinde as ‘uncharitable, unfair, inspired by the Tafseer royalty he received from organizers of the event noting that everything the cleric said against the present administration were against true teachings of Islam, spirit of Ramadan, the present rapid infrastructural developments being undertaken by Governor Seyi Makinde adminstration & the various developmental policies the people of Oyo State are enjoying.

The ruling party in a press statement signed by its State publicity Secretary, Engr Akeem Olatunji, on Thursday 15th April and made available to newsmen, condemned the sermon by Sheikh Bello, describing it as “sermon inspired by royalty”.

The party explained that it was very unfortunate that the cleric who failed to speak up during the dark days of Oyo state under the last administration when the 1 milion boys reigned unabated, civil servants and pensioners were dying in droves due to unpaid salaries & entitlement, contractors failed to or shodilly undertake projects due to kickbacks collected by Government Officials and also lost his voice to speak up for the suffering masses when the people of Oyo state were subjected to unspeakable hardship under the last APC administration despite the huge available resources available then is now expressing his political leanings and sentiments at the detriment of the people’s interest.

Oyo PDP stressed that despite the absence of COVID-19, EndSARS protest, Fulani herdsmen crisis and other security health and security challenges during the last administration era, APC government still owed not only workers reward for their labour but also the aged and retired workers who served the state meritoriously throughout their productive years without being considered for their retirement benefits by the last administration.

According to the statement by Oyo PDP, all of the aforementioned security challenges were fallouts of government failure at the federal level with exception to COVID-19 which is a global pandemic noting that if APC government have had to deal with a snippet of what the PDP government under Governor Seyi Makinde is dealing with, Oyo state would probably have been sold out to maybe China out of borrowings.

The party maintained that the cleric has openly abused and overstretched the privilege due to anyone called or identified as a true cleric since he preferred money by commercializing his sermon above the true gospel of Islam which preaches love, peace and truth at all times.

“Our attention as a party has been drawn to some very uncharitable, unsubstantiated, unfair, and financially inspired sermon credited to Sheikh Muhydeen Ajani Bello at the annual Abiola Ajimobi memorial Ramadan lecture which held on Wednesday 14th April in Ibadan.

“We ordinarily would not have given a reply a thought out of respect for the spirit of the holy month of Ramadan but we chose to put records in proper perspective by reacting to the commercial sermon so as to avoid the cleric creating wrong impressions in the minds of our beloved Muslim brothers based on the sensitiveness of the commercial sermon and its consumption.

“First of all, considering the Holy month of Ramadan in which muslims all over the world are humbly observing fasting, any true cleric is charged with the duty of spreading the gospel of love, peace, and truth will intensify sermons on lifting the already down spirits of Nigerians who have already gone through a lot under the present APC led federal government, so much that the call to divide Nigeria by some sections of the country reached its record peak.

“The good people of Oyo state who had perhaps expected to hear soul lifting sermon from the cleric would by now be left in serious disappointment because the present government which the Sheikh Bello tried fruitlessly to discredit was enthroned by the people who rejected APC in its entirety by not only throwing out their government and with the various heart-rending activities of herdsmen on farmers and bandits on the Nigeria people, it’s preposterous that Sheikh Muhydeen Bello has failed to call out the non-perfoming President Muhammadu Buhari led Federal Government but condemning instead of praising a super performer like Governor Seyi Makinde.

“Government is indeed continuum and as much as we are constrained to abstain from speaking at all about the dead we are compelled to make certain clarifications for the purpose of education and better understanding of how other western countries develop.

“The present PDP government under Governor Makinde believes strongly in purposeful leadership which is why it is strategically making necessary corrections on rehabilitations and reconstruction of critical infrastructures where the last administration failed to deliver on quality and durable ones instead of abandoning them and starting up new ones to gain cheap political scores like APC would do.

“For the sake of records and emphasis, our dear Governor has attained high level of public acceptance and street credibility as Seyi Makinde who in the midst of the youth restiveness and ravaging EndSARS protest walked confidently and boldly among the angry youths to cart way forward.

On the issue of legacy, what tangible legacy and positive development is he ascribing to an Ajimobi administration which left the state in unprecedented debts without tangible projects to show for it?
Also right in the city of Ibadan, the state capital, the evidence of decay, abandoned projects and lack of foresight by the administration the sheik was prasing are more than evident.
Which development is.he talking about when the Ajimobi regime abandoned the Moniya Iseyin road, leaving farmers and farm produce from the food basket of the nation prostrate?
On top of that the Ajimobi led APC government awarded a failed project that wasted N2bn of Oyo’s hard arenwd money.
What positive development is in a government that abandoned Agbowo to rot away and was at the verge of converting the edifice to private use but for providence that brought GSM?
What I the Akobo Oju irin road and the extra bridge needed to ease traffic on that road. Despite the daily suffering of our people on that axis, did the Sheik travel on Iseyin road before making that statement. What about the abandoned onipepeye/Alaska Airport road that was abandoned in the eight years of Ajimobi? The road has come alive now because of Engineer Seyi Makinde. Will the Sheik say he didn’t see anything about junction improvement around Challenge, the Bus terminals in Iwo Road and, challenge and Ojoor. Is he blind to the light up projects phase one and 2? The massive rehabilitation of the 299 primary health care cebtres and the unique initiative being displayed in the management of state finances leading to a 26% increase in IGR?

“Since Sheikh has suddenly found his voice to justify the money received from the organizers of the memorial lecture to deliver sermon during this Holy month, we advise the commercial cleric to channel his energy to join his voice with other Nigerians clamouring for good governance from the APC led federal government before the divisive elements calling to divide Nigeria have their way because Seyi Makinde is already leading the way by examplary leadership.

“As a cleric, using expressions such as ‘we and they’ to depict APC and PDP clearly shows the political party Sheikh Ajani Bello belongs to in principle, and the present PDP government in Oyo state will not be deterred or distracted by whatever means the rejected Oyo APC is deploying to bring down this administration by every means, be it political or religious means since these are two key sensitive areas of manipulating the unsuspecting Nigerians for cheap political gains because the masses whom the Governor serves remain resolute in their continued support.”

The Oyo People’s Democratic Party, while rejoicing with our Muslim brothers and sisters fasting during the beautiful and rewarding month of Ramadan, implore the people of Oyo State to shun all divisive tendencies, imbibe the spirit of Ramadan by being law abiding, lovers of their neighbours, God fearing as we all join hands with the Governor of Oyo State, His Excellency Engr Oluseyi Makinde in making Oyo State a Greater State.

Oyo 2023: Anxiety As Teslim Folarin Leaps To The Next Level

OYSG To Collaborate With CIBN On Physical Development,…