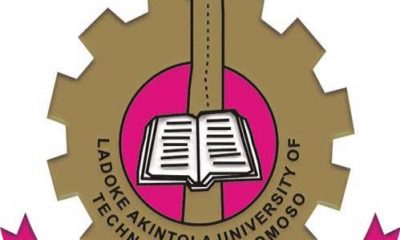 The workers at Ladoke Akintola University of Technology will Thursday, 17th January, 2019, begins a ‘3-day on, 2-day off’ strike model.

In a release signed by Comrade Fajoye Hamzat the institution workers secretary, he said the strike, which they described as ‘3-day on, 2-day off’ strike model unavoidable as “the management has once again started staggered payment of salaries and allowances,” adding that “You will recollect that it was this same method that brought us to the level of being owed part of 2016 and 2017 salaries.”

He added that workers in the University have resorted to “fine and decent baara* style to make ends meet.”

It becomes imperative to inform our teeming members the state of affairs with regards to our numerous demands from the university management and the governing council.

You will all recalled that at the last JAC Congress, our agreement was to write the management informing them of our requests and expectations.

To also give them 7-day ultimatum as directed by the Congress.

The ultimatum has expired on Sunday, January 13, 2019 without any expected positive action from the management.

As was noted at the Congress, the management has once again started staggered payment of salaries and allowances. You will recollect that it was this same method that brought us to the level of being owed part of 2016 and 2017 salaries,balance of 68 hours Earned Allowances, Responsibility allowances, 90 per cent of 2012/2013 promotion arrears and arrears of promotion from 2013/2014 to date. The management jumped the payment September 2016 deductions only to pay October 2018 deductions, which was paid last week.

This arrangement is making it hard to calculate the real amount of outstanding amount of salaries and allowances.

With the present situation, many of our members are seeking solace in ‘fine and decent baara’ style to make ends meet.

Our continuous coming to work is becoming hard and harsh which is making it more harder and harrowing for a lot of us. In the technical sense, the university is gradually locking us(employees) out.

Arising from the above observations, the JAC executive council met today, Monday, January 14,2019 to evaluate the situations on the campus vis-à-vis the report of the meeting with LAUTECH Alumni and the reply of JAC letter dated January 3,2019 to the management and resolved as follows:

Dare to struggle dare to victory.

For and on behalf of JAC LAUTECH

We Will Change Landscape In The Way Our Youths See…