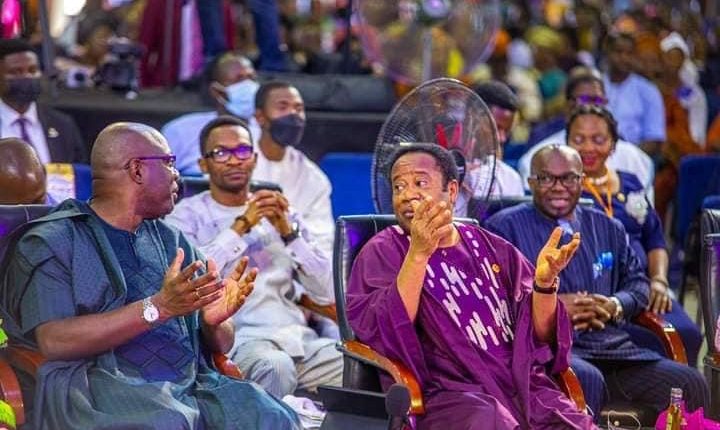 …He has touched several lives positively’

Oyo State Governor, ‘Seyi Makinde, on Sunday, said his administration has been able to strenghten the security architecture of the state by streamlining operations between Amotekun and other security agencies.
The governor, who was speaking at a special Thanksgiving Service to mark the 66th birthday of the presiding Pastor of Livingspring Chapel International, Pastor Femi Emmanuel, held at the Livingspring Chapel International, Dominion City, Aduloju, Ibadan, said that his government has invested heavily in security more than any of the previous governments in the state.
He also decleared that his administration is doing everything to make Amotekun more professional by giving its operatives necessary training, adding that no administration has committed more resources to the issue of security than the current government in the state.

A statement by the Chief Press Secretary to the governor, Mr. Taiwo Adisa, quoted Makinde as equally extolling Pastor Emmanuel, saying that he has touched many lives positively.
He said: “I thought of leading this message with the book of Psalm 90 vs 12 where the Psalmist implored us to number our days in wisdom.

” It seems to be an appropriate scripture to use since we are here to celebrate a new year added to the life of our friend, father and spiritual leader, Pastor Femi Emmanuel.
“In truth, as we cross each year in our lives, we need to think more about acting in wisdom.
“When I look at the large turn out of worshippers here, it is a manifestation that our father has been touching lives.”

According to the governor, Pastor Emmanuel prayed for him and supported him during the campaigns, adding that the Pastor has affected millions of others souls across the world positively.

Speaking on the state of security in Oyo State, Makinde said that his administration has tightened security by ensuring a seemless relationship between Amotekun and other security operatives.

He explained that Amotekun was established to complement the activities of other security agencies, saying that its impact has been felt in all the nooks and crannies of the state.
“Sometime ago, in this part of Nigeria, we only hear about killings, kidnappings from faraway places but now, we are experiencing it. “Yes, we will do our part, put things in place like we have done here in Oyo State.

“Before the advent of this administration, there was nothing like Amotekun but we set it up, equipped the outfit and the operatives are all over the place now. People cannot imagine Oyo State without Amotekun.

“Now, we are making the agency more professional, giving its operatives more training. When Amotekun was established, the Police thought it came to take over their jobs but we have been able to streamline between Amotekun and other security agencies and they are now working together in unity.
“I want to say it again that no administration, in the history of Oyo State, had committed more resources to the issue of security than this administration.

“We have the emergency contact number, 615. The number is our magic number for security. You don’t need credit on your phone to call it. You can put it on your phone as speed dial. You only need to witness somebody or the house close you being attacked before you dial it.

“If people are coming to complain that they dial the number and there was no prompt response, we will address it.
“But most times, if we ask people if they are aware of the number, they say they thought it won’t work.

“Please, try it at your own time as well. Just try it for the sake of convincing yourself. The number is working and the people are at alert.
“We also went into voluntary policing arrangement where you don’t have to be a policeman. We have people that have volunteered and we are working with them.
“After we have done all we can, we will hand over everything to God because we are only human.”

He also congratulated the Pastor and his wife on their wedding anniversary.
The governor assured the people of Oyo State that his administration would continue to work to ensure that lives and properties remain safe and secure.