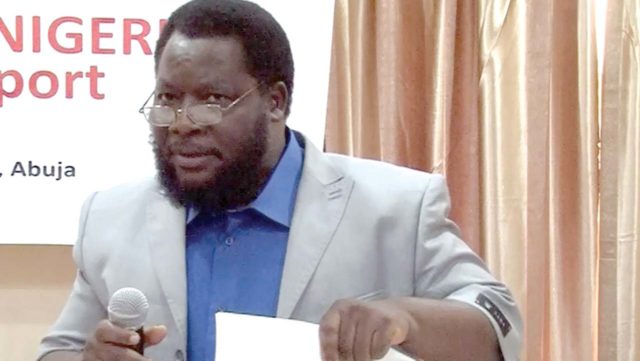 Labour activist and human rights lawyer, Femi Aborisade has wrote
Oyo state Attorney General and Commissioner for Justice to prosecute owners and managers of Henkel Nigeria Limited and Expand Global Industries over the death of Richard Gbadebo over failure to observe duty of care in respect of Richard Gbadebo who died on Tuesday, the 28th day of July 2020,

Recalled that Richard Gbadebo, a 300-level student of the Department of European Studies, Faculty of Arts, University of Ibadan, died in an industrial accident last Tuesday.

The 21-year-old Richard was said to have died after he fell into the factory’s soap-making machine. The deceased student was said to be on a night shift.

We have been briefed and our services retained by the family of Late Richard Gbadebo, as well as the Alliance On Surviving COVID-19 And Beyond (ASCAB) Oyo State Chapter and International Lawyers Assisting Workers (ILAW) Network, Nigeria Chapter, with presence in 58 countries of the world, all of whom are hereinafter referred to as Our Clients, on whose behalf and instructions we write this petition against the owners/managers of HENKEL NIGERIA LIMITED AND EXPAND GLOBAL INDUSTRIES LIMITED who caused the death of Richard Gbadebo through their failure to observe duty of care in respect of Richard Gbadebo who died on Tuesday, the 28th day of July 2020, in the course of working for the two companies.
ABOUT THE TWO COMPANIES

Nigeria is a country governed by laws. Under the laws of Nigeria, it is obligatory for the owner of a factory to exercise duty of care and provide safety measures to safeguard life, where the operations in the factory involve working with anything, whether living or inanimate, and whether moving or stationary, of such a nature that, may endanger life. Where there is failure to exercise the duty of care prescribed by law, the owner(s) and their top managers who have responsibility not to endanger life are deemed to have caused the death or any other consequences that may result thereby.

According to the family of the deceased, Late Richard Gbadebo, was on a night shift duty on 27th July, scheduled for the period between 6pm and 7am. Sometime in the morning of 28th July, the mother received a call from a colleague of Richard stating that Richard had slumped at work. On arrival at the companies’ premises, a company nurse tested her blood pressure and informed her that she had high Blood Pressure (BP). She was then taken to Zoe Hospital around the companies’ premises where she was admitted. She was not allowed to see the corpse of her son. However, the mother called her husband, Mr. Olusola Gbadebo who got to the companies’ premises around 7.30am.

Furthermore, whereas the family has never discussed any issue about monetary compensation with the companies, the family is surprised and embarrassed to read statements in the media, which tend to trivialize the murder of their son. The statements are attributed to one Aliyu Jibril, the Human Resource Manager of Expand Global Industries Ltd, who is alleged to have said that the companies have “reached out to compensate the family of the deceased”. (See (See https://punchng.com/factory-accident-firm-to-compensate-ui-students-family/?amp=1&utm_term=Autofeed&utm_medium=Social&utm_source=Twitter&__twitter_impression=true and https://thenationonlineng.net/company-to-compensate-dead-workers-family/ both accessed online on 3/8/2020)

Our clients, specifically, the family of Richard Gbadebo, briefed us that up till today, 3rd August 2020, no official explanation as to the circumstances leading to the death of Richard Gbadebo has been made to the family. The family only gathered from Richard’s colleagues that he slipped and fell into the bowel of the machinery he was working with. That the machinery is meant to be operated by at least four persons. But that Richard was the only person operating the machine at the time of the incident. The colleagues who were outside the engine room claimed they noticed blood mixed with water where only water was supposed to flow out. The blood alerted them and they went to check the machine only to find Richard trapped in the machine. However, upon the retrieval of the corpse on 28th July 2020, at about 12noon, the stomach was sliced open, his trousers and boot were on and the head was intact but without any trace of blood on his body. The family of Richard Gbadebo is perplexed at the strange observations made when the agents of the companies brought out their son from the factory.

We have the brief of Our Clients to invite the Oyo State Government to thoroughly investigate the circumstances surrounding the death of Richard Gbadebo. According to the family, Richard was the only son in the family and a 300-level student in the Department of European Studies. The urge to assist the family finances pushed him to accept to work to earn some income during the COVID-19 lockdowns involving stay at home of students.

In particular, the office of the Attorney General of Oyo State is invited to invoke and act upon Section 211(1) & (3) of the Constitution of the Federal Republic of Nigeria, 1999, as amended, and institute criminal proceedings against HENKEL NIGERIA LIMITED and EXPAND GLOBAL INDUSTRIES LIMITED and their managers who are the minds and alter ego of the companies in the exercise of statutory duty of care. These measures are considered imperative in the public interest as well as the interest of justice.

The Alliance On Surviving COVID-19 And Beyond (ASCAB), Oyo State Chapter and the International Lawyers Assisting Workers (ILAW) represent the interest of the public and the international community of pro-labour lawyers in ensuring justice for the deceased Richard Gbadebo. As the Late Justice Chukwudifu Oputa aptly puts it,

“Justice is not a one-way traffic. It is really a three-way traffic: justice for the appellant, accused of heinous crime of murder; justice for the victim, the murdered man, i. e. the deceased whose blood is crying to the high heavens for vengeance; and finally to the society at large; the society whose norms had been desecrated and broken by the criminal act complained of …” (Josiah v. State (1985) 1 NWLR (Pt. 11) 125 at 141.

Unless the Oyo State Government ensures justice for Richard Gadebo, employers of labour may not take seriously the life, safety and health of workers by providing the necessary Personal Protective Equipment (PPE) and fencing of every dangerous part of any machinery. It is the concern of our clients that Richard Gbadebo would not have been killed by the machinery he was working with if the necessary PPE was provided and the dangerous parts of the machinery were properly fenced to prevent the kind of calamity that befell Richard Gbadebo.

The public perception is that pervasive impunity prevails in the Nigerian society because successive Nigerian governments tend to fail to act as prescribed by law where the lives of ordinary workers are concerned. It is the fervent hope of our clients that the Oyo State Government and the office of the Attorney General would not fail Richard Gbadebo, his family and humanity in the instant case. The blood of Richard Gbadebo is crying for justice. Our clients demand justice for Richard Gbadebo.

Please accept the assurance of our highest regards.

Muraina’s Motion For Rehabilitation Of…

One Of Our Strongest Pillars Has Gone – S/PDP Mourns…