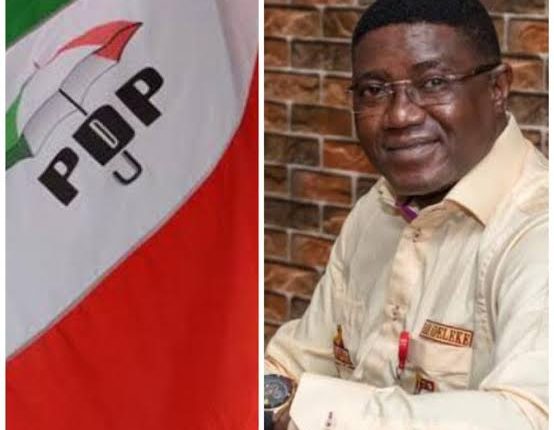 An interest group of the All Progressive Congress (APC) in Oyo State; Oyo Must Be Great (OMBG) has reacted to the unfortunate and unguarded comment credited to the Oyo State Pacesetter Service Chairman, Mr. Dare Adeleke which he considered as a reaction to the call for the disbandment and sacking of both Park Manager System (PMS) and her ‘undisciplined’ Disciplinary Committee Chairman, Alh. Mukaila Lamidi (Auxiliary) respectively.

The group through a statement made available to journalists by her Coordinator, Hon. Ishola, Akeem Adetoyese described the reaction of the Chairman Oyo State Pacesetter Service, Mr. Dare Adeleke, as one who lacks empathy, substance and as well failed to address the main issue of insecurities but rather choose to mislead the general public all in the name of impressing his principal ingloriously.

“We wouldn’t have dignified him with any response because the general public already knew that he’s fond of playing eye service politics because he’s a politician without any integrity. The inconsequential and incoherent press statement used to discredit a chieftain of APC in Oyo State, and Oyo Must Be Great (OMBG) cannot be surprised us because we were very much aware of the roles he played in 2015 before Governor Seyi Makinde was schemed out the PDP; the group said.

The OMBG noted that; we are very sad that a person like Mr. Dare Adeleke could be commenting that, ‘’Prof Adeolu Akande is only grabbing at the dry straws and desperately holding on to them, hoping to use them as instruments to pole shaky gubernatorial ambition……..” We would not however be surprised because that was how he was used recently to discredit one of the leaders of his party in the south west; Governor Ayo Fayose.

It is very necessary to put the record straight, Mr. Dare Adeleke has been an opportunistic politician who only became active when he is in the hot seat of losing where he is eating his crumbs and desperately finding a feat of holding Gov. Makinde into ransom of keeping him as the Oyo State Pacesetter Service Chairman.”

“Like we have noted in our press statement condemning the Iwo-Road Mayhem that, it will be very necessary for the government of Oyo State to disband the operations of the PMS and suspend the appointed PMS Chairmen in the interim pending the completion of the review of the PMS operations in the state. And that, this is the time the Governor should size and measure the sincerity of his aides towards the success of his administration.”

“It is then obvious as well that Mr. Dare Adeleke is far from being sincere to his principal, Gov. Seyi Makinde, on the bad image that the PMS and Alh. Mukaila Auxiliary has given to the government.”

“That Mr. Dare Adeleke can be referring to the peaceful 8years administration of late former Gov. Isiaq Abiola Ajimobi, as the causes of the present security challenges facing the state internally is another evidence that he is only talking to save the office he is presently occupying as Gov. Makinde is about to show him the way out of that office for a better and competent hand.” We would also not be surprised that he’s playing this kind of dirty politics because we were fully aware of how frustrated he was before Gov Seyi Makinde could give him his present post.

“Mr. Dare Adeleke should further know that insecurity knows no party member. And it should be handled with utmost sincerity with no political coloration or sentiment. That is where his attention should be in advising his principal, Gov. Seyi Makinde, rather than being petty all around.” The group concluded

Linking Me With Iwo Road Mayhem Is Another Ploy By Gov. Makinde, His Allies To Implicate Me – Olopoeyan