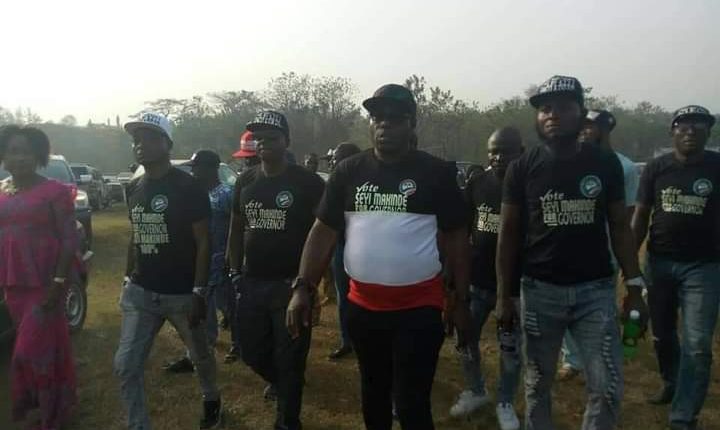 An Oyo All Progressives Chieftain and Senior Advocate of Nigeria, Chief Niyi Akintola has consoled Alhaji Bisi Olopoeyan a PDP leader for been used and dumped by governor Seyi Makinde.

Akintola in his solidarity message to Olopoeyan advised the Oyo PDP leader to take heart and hendforth called leaders and gatekeepers to always think before throwing weight behind any unprincipled ambitious Politician.

The legal luminary and Aare Bamofin of Ibadanland, who pen his heart for Olopoeyan said, the Great Leader would not be the last victim of politics of neglect,he sited many examples of politicians who had betrayed their benefactors when they got to power.

“That has been our bane in Yoruba land. We are too trusting. While negotiating people into power, most Yoruba leaders and gatekeepers don’t negotiate for “what is in there “for them and their followers. Going down memory lane, our forefathers in politics paid for their good naturedness for being with utmost respect, naive.

In the 1940s our patriarch in Politics, Herbert Macaulay was the founder and Patriarch of NCNC. He led the Party and brought in so many educated young men in Southern Nigeria, down to Cameroon. These gentlemen included Dr Nnamdi Azikwe an Igbo intellectual. So much was placed on the shoulder of Dr Azikwe by Engr Macaulay without any plan ” B”. Herbert Macaulay died and the party became a regional Party and was hijacked. The Yoruba lost out in the party as only TOS Benson, Adegoke Adelabu, Adeniran Ogunsanya etc remain in the Party while Messrs H.O. Davies, Olorunnimbe, Odemo of Ishara, Akinbiyi, Aboderin , Akinloye et all left and found solace in AG.

Then came 1964, our next Patriarch Chief Obafemi Awolowo SAN entered into an alliance with NCNC to formed UPGA with agreement to boycott the 1964 general elections but without any Plan ‘B’. The NCNC reportedly breached the agreement and went on to have the election which they had agreed with AG to boycott. ( If you are in doubt of the authenticity of this story, read the newspapers interview of Chief Segun Osoba in the Punch, Tribune , Sun and Vanguard newspapers of the last two to three weeks) in response to the comments of Chief Ayo Adebanjo on the former.

Then, came 2007, Chief Olusegun Obasanjo railroaded everybody that is somebody into supporting Yar’Adua without any alternative plan and he almost paid for the indiscretion with his skin. In 2010, Chief Obasanjo moving like a bulldozer was at the House of Chiefs in Ibadan ordering every notable PDP chieftains to support Jonathan. He was moving like a thunderbolt from one state to the other, spending his enormous goodwill to galvanise support for Jonathan but when the Push comes t0 shove, he was humiliated and called a thug by Jonathan.

Then came 2014/2015, every arsenal available to notable Yoruba leaders were deployed to send Jonathan administration to the grave for good reasons but again, without Plan B. Obasanjo paid for the indiscretion while other Yoruba notable leaders are still counting their losses. Little fries like us have taken suicidal positions to support one government or the other at a very great cost to our Political future and economic wellbeing also without plan “B”. Some have paid the supreme price, others have suffered great economic losses whilst some unfortunately sacrificed their family wellbeing to see to the enthronement of some ingrate Political allies only to bite their fingers mercilessly.

So the experience of our brother and compatriot, Chief Olopoenia is not strange. I can feel his pains and anguished as I watched the video clips of his vituperation. He was bitter and inconsolable. I was once in his shoes and I can understand his frustration. Many questions would be agitating his mind as he transfers his aggression on the hapless reconciliation committee led by respected Dr Saka Balogun. But what can the committee do to assuage the feelings of the hapless Comrade Olopoenia. The committee neither have the yam nor the knife. Alas, the one who has the Yam and the Knife is the Governor. Like many before him under this hapless 4th Republic, the Governors are the Emperor. You are as powerful, as relevant and as recognized as the Almighty Governors want you to be in his Government.

I have a mere personal Assistant dishing out orders and instructions to the Vice President and Deputy Governors under Obasanjo and Jonathan. In some states, Deputy Governors are seen as spare tyres or at best ” constitutional evils. The Yoruba leaders while negotiating Political agreements or alliances often forget that ” Political merger is different from Political acquisition”.

Take heart my brother Chief Olopoeyan…Never mind that while others were playing harlots, moving from one Political party to another, changing alliances like underwear, you stood by the party you believe in. Yes, I know very little about your party, the PDP but as a very keen Political observer in Oyo state, I know that you, Senator Adeseun, Jumoke Akinjide and Mulikat Adeola, Dare Adeleke and Dr Saka Balogun did so much for the PDP and gave us the progressive in the state a bloody nose with your deft move of bringing Baba Senator Ladoja on board of your coalition that saw to the APC exit in the state.

Never mind also sir as you are in good company of our Political heroes past, Awolowo suffered it, H.O. Davies suffered it, Akinbiyi suffered it, Aboderin suffered it, Bola Ige suffered it when some do gooders brought in Olu Falae to supplant Uncle Bola Ige at the infamous D’ Rovans Hotel primaries that led to the crippling of Afenifere till today. Adedibu suffered it, Senator Ladoja suffered it, Senator Adeseun, Jumolke Akinjide, Mulikat Adeola, Alhaji Bashir Ajibade, Pa Olopeeyan, Alhaji Kunmi Mustapha, Chief Koleoso, Chief Lasunsi, Chief Koleoso, Dr Busari Adebisi, Chief Bayo Sanda, Alh. Abu Gbadamosi, Engr Femi Babalola, yours truly, Chief Adelere, Deacon Afolabi, Dr Bayo Adewusi, Yunus Akintunde etc all suffered the same fate in the hands of Political ingrates whose thrones were as a result of collective efforts and sweats but who chose to rely on importees from the UK, USA, Europe, SA, Lagos , Abuja and other not too known places , as COS, SSG, SAs, Commissioners, DGs even when such importees lack political values, all in the name of being called technocrats and at the expense of the hard working party members who toiled day and night to mobilise and sell the party to the electorates.

It could be annoying and frustrating to be in government without being in power. It is a malady that is common to the two major Political parties in Oyo state. It is not a disease of PDP alone. It is also very much present in APC . “Bamboo go de work, Monkey go de chop” and hence the instability prevailing in the two major Political parties in the state. Having identified the immediate and remote causes of such instability, the question is, what is the solution? The solution is very simple!- Start playing less money politics. Play politics of Principle, politics of good conscience and Politics with fear of God.

The one who gives you money to secure your support for his Political ambition would have neither respect nor regard for your person. He knew your price already. He had paid for your support and allegiance. What moral authority do you have over him again. Political leaders and gatekeepers, think , think always think before you throw your weight behind any unprincipled ambitious Politician. Sell not your being for a temporary advantage but strive for greater ideals. So, my brother Chief Olopoeyan, welcome to the club. You will certainly not be the last victim as many of those gloating over your predicament would sooner or later become victims too. It is just a matter of time.