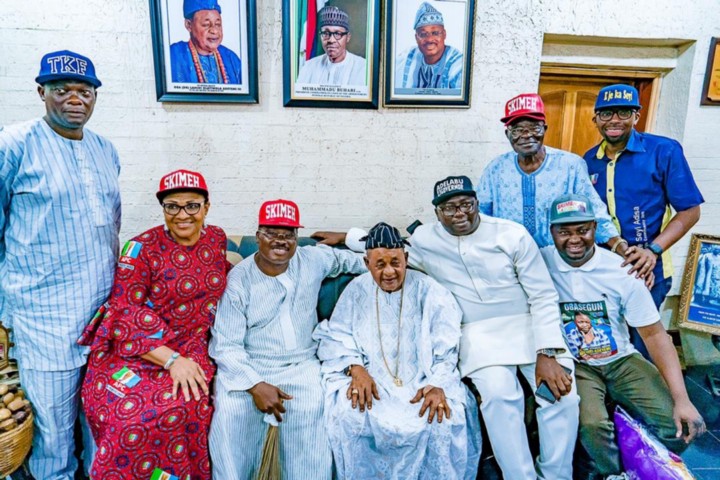 AJIMOBI URGES ELECTORATE TO SHUN PDP AFTER 16 YEARS OF ‘LOCUST’

Oyo State Governor, Senator Abiola Ajimobi, has described the sixteen-year rule of the Peoples Democratic Party as years of locust when public utilities on which they allegedly invested N100billion were auctioned for N10billion.

Ajimobi, who is the All Progressives Congress candidate for Oyo South Senatorial District, said this when he led the party’s governorship, National and State Assemblies campaign trail to Oyo zone, on Monday.

Among the frontline presidential candidates, he said that only President Muhammadu Buhari had the integrity and core values required to take the country to the ‘next level’ of development.

After touring Afijio, Jobele, Fiditi, Aawe, Ilora and Oyo township on a road show and campaign stops, Ajimobi led the team to the palace of the Alaafin of Oyo, Oba Lamidi Adeyemi, to receive royal blessings.

Ajimobi said, “If not for politics that allows all manners of political parties to seek the people’s votes not minding their pedigree, no PDP candidate ought to have had the boldness to campaign with the atrocities they committed with the national patrimony.

“But, that is the beauty of democracy. Honestly, with the measurable and palpable achievements of the APC government at the national and state levels, this election ought to be a walk over for the APC.

“We in APC are happy that we share party affiliation with President Muhammadu Buhari for his core values of integrity and love for a united, prosperous Nigeria.

“Imagine PDP coming out to campaign to you! They have no shame. What they spent over N100billion to put up in social infrastructure in their 16 years of locust, they auctioned for just N10billion before leaving office.”

Ajimobi, therefore, urged the people of the state to vote for President Buhari and APC National Assembly candidates on February 16 and to also turn out in their numbers on March 2 for the APC governorship and state assembly candidates.

Oba Adeyemi said that he had been telling candidates of other political parties visiting his palace for blessings that they would reap the fruit of the developmental projects that they had sown in Oyo community on election day.

He however appreciated Ajimobi for his approach to governance and ability to lead the state to what he called an enviable height of development.

He said, “I pray that you achieve all you desire now and in future. In essence, I pray that all the good things you have done for Oyo community will be repaid to you on the day of election.

“I’m father to all and that is why my palace is open to all of you. But, I have made it clear to all those visiting here that they will all reap the fruit of the developmental projects they had sown in Oyo community on the election day.”