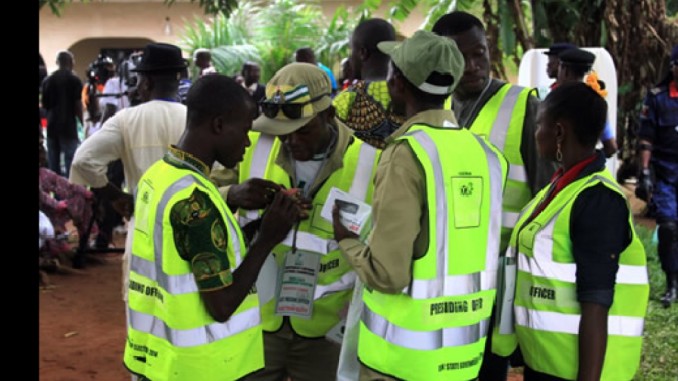 The Peoples Democratic Party (PDP) has called on the Independent National Electoral Commission (INEC) to within 24 hours publish the list of all officials and ad hoc staff that would play any form of role in the forthcoming general elections at all levels.

The National Publicity Secretary of PDP, Mr Kola Ologbondiyan, who made the call at a press conference on Monday in Abuja said that the list should be published for verification by stakeholders.

He also called on the international community to place the INEC Chairman, Directors and Commissioners in INEC responsible for this election on its watch list in the conduct of the elections.

Ologbondiyan however, urged all members of the PDP, and all meaning Nigerians to vote for the party and protect their votes.

Reacting to the allegations, the Chief Press Secretary to INEC Chairman, Mr Rotimi Oyekanmi, told the News Agency of Nigeria (NAN) that less than two weeks to the general elections, the commission could not afford to be distracted by baseless allegations.
Oyekanmi said that the Commission was not a political party and would not allow itself to be dragged into unnecessary controversies at a time like this.

“The INEC has been conducting general elections since the past 20 years.
“During this time, especially since 2010 and particularly from 2015, the commission has introduced many innovations to improve the electoral system.

“One of such innovations is to ensure that no member of any political party is engaged to participate in the conduct of elections.

“I therefore call on any political party or individuals with information on how the Commission plans to or has engaged members of any political party as ad-hoc staff for the upcoming general elections to make such information public and mention specific names.
“It is not enough to make wild allegations. It is incumbent upon those who make such allegations to also provide the proof,” Oyekanmi said.

He assured that INEC would conduct free, fair and credible general elections, and for which it needed the support of all Nigerians

AJIMOBI URGES ELECTORATE TO SHUN PDP AFTER 16 YEARS OF ‘LOCUST’

Don’t be Carried Away, Start Equipping Yourself For…

Asking Secondus To Resign Means You lack Knowledge Of Party…