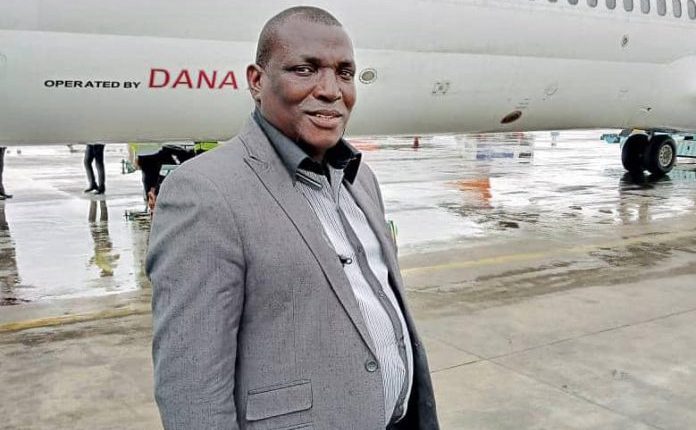 Professor Samuel O. Ogundiran, the chairman, Adeseun Ogundoyin Polytechnic, Eruwa, Oyo state has described the recent activities of the institution’s Senior Staff Association of Nigerian Polytechnics (SSANIP) and Non Academic Staff Union ( NASU ) as mischievous and self-centeredness on the side of the workers.

It will be recall that, the poly SSANIP, NASU demanded for the removal of the Chairman, Governing Council of the institution, Professor Samuel Ogundiran over series of allegations, the unions accused Ogundiran of illegally demoting, dismissal of staff of the institution.

In a press statement signed by Prof. Ogundiran, made available to pressmen on Monday in Ibadan, said he and members of the council have been making decisions on all issues base on the interest of the institution.

Ogundiran said decision to demote and terminate appointment of some staff was done when the activities done to promote and employ the said staff is questionable.

Gentlemen of the Press,

I observe all protocols.

It has become expedient to react to the demands of the SSANIP and NASU branches of Adeseun Ogundoyin Polytechnic, Eruwa, contained in the press briefing addressed by the Chairmen of the two Unions on Friday, 18th March, 2022. This step becomes inevitable for obvious reasons.

As the Chairman, Governing Council of the Institution whose removal is being maliciously demanded for, I owe it as a duty to present the other side of the story that the arrow heads of the agitation would rather prefer to be blotted out. Failure to put the records straight would not only erode the good works and services the present Governing Council is doing towards enhancing better rating of the Institution among the comity of Polytechnics, but it equally has the tendency to turn their falsehood into ‘truth’, if left unchallenged.

As mischievously captured in their joint letter to the Honourable Commissioner of Education, Science and Technology few days ago, the two Unions claimed to have resolved in passing a vote of no confidence on me following their “observed” acts of misdemeanors and gross misconducts in office in recent times. They cited cases of demotion of a member of staff and termination of appointments of four (4) Part-Time staff members as the major reasons for embarking on indefinite strike action effective from Wednesday, 16th March, 2022. These claims are half-truths meant to draw sympathy and draw the eyes of the public away from the root cause.

Let me emphasize at this juncture, that Governing Council decisions had never been taken unilaterally under my leadership. Decisions are taken in Council, and such decisions are always backed with decision extracts. How the two cases of alleged demotion and termination of appointments of four (4) Part-Time staff (as raised by the Unions) got regarded as the singular and personal decisions of the Council Chairman is not only illogical but treacherous in intents and purposes.

Permit me to give you full details of the two cases under reference, in order to put the issues in proper perspective.

Governing Council meetings are held quarterly, according to the guiding policy approved for it by the State Government. The fourth quarter meeting for 2021 held on 25th February, 2022, where Committees earlier set up by the Council presented their reports. One of such Committees was the one set up to consider appeals on 2020 promotion exercise.

At the meeting, I directed the Ag. Rector to present the findings of the Committee to the Council, which he did. According to the report, the erstwhile management that conducted year 2020 promotion exercise did not do it in good faith, as it was fraught with irregularities that suggested favouritism. As it affects academic staff, the Committee recommended that the upgrading recommendations of two staff members by two levels should be reduced to one, if double-standard is to be discarded and fairness upheld. This has been implemented to the letter by the Management without uproar, because fair is fair.

Regarding Mrs. M.O Opakunle whose case is being unionized, her conversion/promotion matter equally came up for review. In her own case, she was erroneously granted conversion from Chief Executive Officer (Conhess 13) to Principal Assistant Registrar (Conhess 13) without considering her point of entry in her previous cadre, which is irregular and strange to Civil Service Scheme. As if that was not enough, the erstwhile management, without the knowledge and approval of Council, went behind the scene to promote her to Conhess 14 with a nomenclature of Chief Executive Officer 1 (CEO 1), which is non-existent in the Scheme of Service. Going by the recommendations of the Committee set up, the Council decided that Mrs. M.O. Opakunle be given the option to choose between her conversion level being reversed to Senior Assistant Registrar (Conhess 11) while her salary is made personal to her; or be reverted back to her Executive Cadre on Conhess 13. This decision was unanimously agreed to by the Governing Council during our sitting. How such a decision calls for my removal leaves more than meet the eyes!

Another report considered at Council meeting has to do with illegal appointment of four (4) Part-Time staff by the erstwhile Management led by Mr. Peter O. Adejumo. Without the knowledge and approval of Governing Council, the then Management replaced two staff members who died in service, and two others who voluntarily resigned. One of the two persons who resigned was a technician in the Works and Services Department. The current Chairman of SSANIP, Mr. Titiloye who equally doubled as the then Head of Works, abused his office by replacing him with his blood brother, Mr. Funso Adeseun Titiloye, who got employed without Council’s approval. The fourth person’s replacement was done in the most daring way. Without Council’s approval, his name was replaced with another person’s; and has been on the payroll of the Institution for over a year running.

To further confirm the impunity with which the illegality was perpetrated, the ‘employee’ was not, and has not been issued any letter of appointment till date, even when he got paid every month. After extensive deliberations on the issues of these four (4) illegal appointees, the Council decided and directed that they should be told to withdraw their services with immediate effect and that Management should expunge their names from the payroll. Again, this decision is another sin of ‘misconduct’ that the Unions, ably misled by Mr. Joseph Titiloye is crying wolf about!

Let me state categorically that none of the issues clandestinely unionized due to selfish interests of the union leaders, are not in anyway related to staff welfare. As a matter of fact, the four persons appointed illegally are not members of any Union, as their status as Part-Time staff do not permit them to belong to any staff union. The Honourable Commissioner of Education, Science and Technology is aware of these self-serving and malicious demands, and had even dialogued with them on two occasions without results.

If wish to equally put on record the understanding and support enjoyed from the students populace, their Students’ Union Government (SUG) and the Academic Staff Union of Polytechnics (ASUP) of our great Institution. I thank you for your belief in the principles of equity and fairness, and for rejecting favouritsm when you smell one. Adeseun Ogundoyin Polytechnic, Eruwa was established by our forebears, for all of us to excel and fulfil our dreams in whatever capacity without fear or favour. And that vision is what the Governing Council under my leadership is poised to uphold. No threat or intimidation will make me or members of my esteemed Council members back out.

Contrary to the claims by these disgruntled Union leaders, I do not have control over the incomes and expenditures of Adeseun Ogundoyin Polytechnic, Eruwa. I am not a signatory to the Institution’s accounts, neither am I the approving authority. Whoever is not mischievous cannot claim ignorance of due process in financial matters, as far as tertiary Institutions in Oyo State are concerned. How and when would I steal? Whatever I became today is as a result of hardwork. I would not take kindly to such spurious allegations. Otherwise, whoever alleges so recklessly should be ready to defend such, when the law intervenes.

It was also mentioned in one their earlier press releases that the Institution had not witnessed any progress since I came on board as the Governing Council Chairman. This is nothing but blatant lie from the pit of hell. An open verifiable fact is the issue of accreditation where we recorded 100 percent success in December, 2020 / January, 2021. Myself and some Council members were available throughout the exercise to give moral support and leverage on personal relationships which were deployed towards making it a success.

The issue of our 2017/2018 graduands who were denied NYSC mobilization as a result of non-accreditation of their programmes was equally a big challenge when we were inaugurated as Governing Council. The affected graduands had staged several protests (being victims of circumstances) to demand for mobilization, against several Managements without success. Due to personal influence and cordial relationships enjoyed with the NYSC officials, the sets of students hitherto not mobilised, have been called up and are presently observing their service in several parts of the Country.

At the last meeting of Governing Council, I was given the go-ahead by members to concretize negotiations with Bank of Industry (BOI) for the industrialization of our institution. towards enhancing our internally-generated revenue (IGR). Having cleared the backlog of results not processed by previous Management teams, the Council has agreed to fix the maiden Convocation of our Institution to coincide with the anniversary of our autonomy. We are just waiting for the approval of His Excelelncy, Governor Seyi Makinde before we make the date public. It is our belief that such maiden Convocation ceremony, when held, will be part of the long success story recorded for, and by the people’s Governor, Engr. Seyi Makinde, who I hold in very high esteem.

Thank you so much for listening, as I welcome questions and requests .for clarifications.