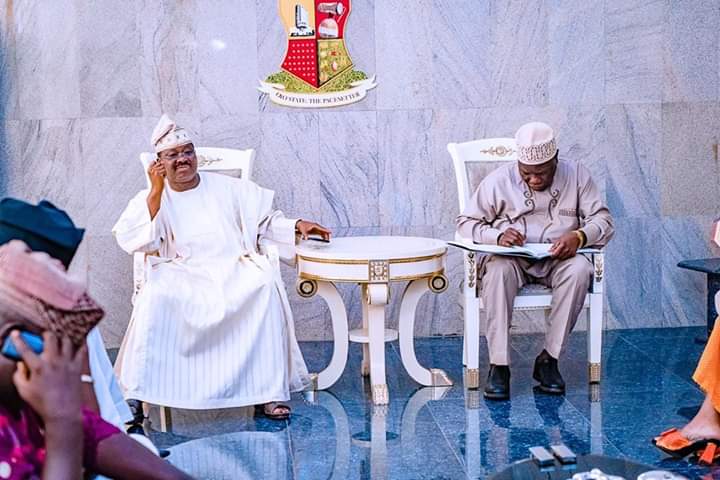 Governor Abiola Ajimobi of Oyo State on Friday warned the members of the National Union of Road Transport Workers (NURTW) in the state to eschew any form of violence and crisis in their effort at changing power.

The advice is coming following feelers from some quarters that a faction in the body is threatening to take over power from the incumbent, immediately a change of guard occurs at the state governorship level.

Ajimobi (Baba Peace) gave the advice while playing host to the National President of the Union, Mr Najeem Yasin who led other national officers of the union to his (Ajimobi’s) office on a courtesy call.

Giving a remark, the governor noted that the union must stick to the provisions of its constitutions in terms of change of power and ensure that the era of using cutlasses and guns to take over motor parks and garages in the state should be gone forever.

While thanking the NURTW boss for his support to achieving peace in the state chapter of the union, Governor Ajimobi enjoined a strict adherence to the Union’s constitution in the selection of its leaders.

Ajimobi said, “Our administration came on board when the state was a garrison command. There was brigandage everywhere caused mainly by the activities of NURTW members. There were so many no-go-areas across the state, especially in Ibadan.

“We promised not to interfere in the activities of the union and restore peace to the state which we achieved tremendously. Our administration did very well by whatever yardstick anyone might intend to use and we are the most peaceful, successful and security-conscious administration in the history of the state.

“I am proud to say that whatever we have achieved today in Oyo state, especially in terms of peace and security, Alhaji Yasin and his executives contributed to it.

“On your election, just follow the law and do whatever the law says. Don’t bend it. And leaders must know that anywhere you are, don’t want to be there forever because you cannot be there forever.”

Speaking earlier, the NURTW boss assures that nobody or group can take over leadership of the union unconstitutionally noting that the era of taking over motor parks with guns, cutlasses and violence is long gone in the history of the union in the state.

He added that all transitions at any level of the union would be in compliance with its constitution, calling on members to sustain the peace established under the Ajimobi-led administration.

“Your Excellency, we are here in Oyo State to meet our members and after the meeting, I felt it is important to visit you. We want to appreciate you for the peace that reigned in our union in the state.

“Since the inception of our union in Oyo State, we have never enjoyed relative peace like the one witnessed under your administration. Today, we have forgotten the era of using cutlass and other dangerous weapons to take over the leadership of the union in the state.

“Anyone who tries to take over unconstitutionally or violently should be ready to face the full wrath of the law. We are now affiliated to the International Transport Federation, and so we have gone beyond brigandage and violence.

“Some people have been going around that by May 29, another leadership is taking over but I have told them that it cannot be because it is against our Unions constitution.

“We know the sacrifices you have made in our union to enjoy the current level of peace and stability and we will never allow anyone takes us back. And that is why we have come to thank you