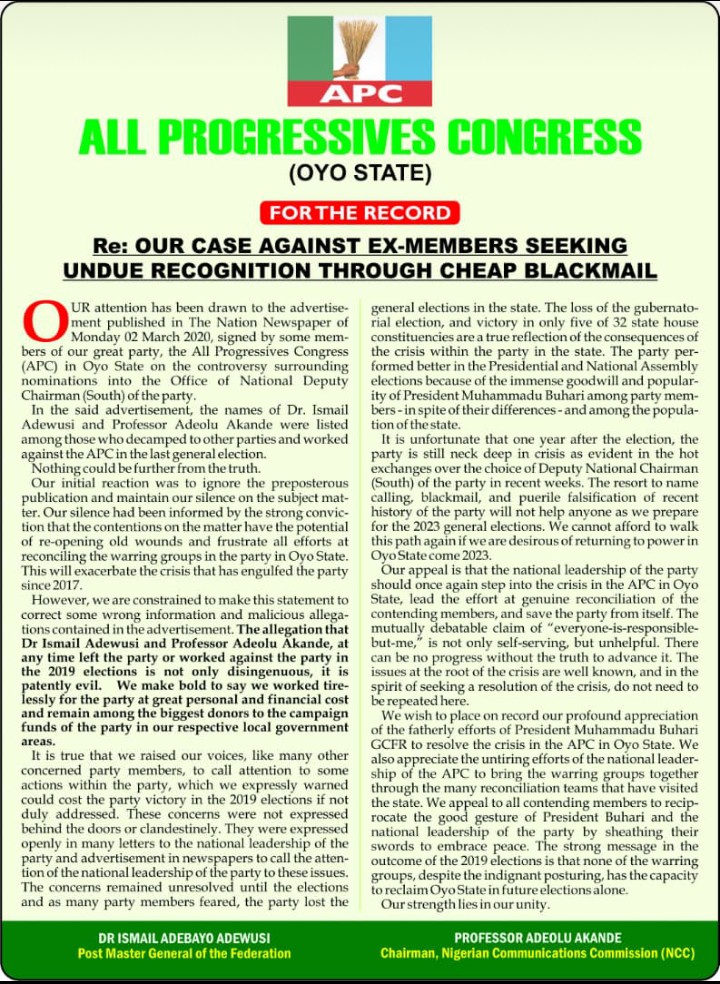 Oyo state born Professor Adeolu Akande Chairman, Nigerian Communications Commission (NCC) and Dr Ismail Adebayo Adewusi, Head, Post Master General of the Federation on Tuesday has gave an extensive explanations of their unflinching supports given to All Progress Congress in Oyo state before and during the 2019 general election.

The Oyo state politicians in a press release, reacted to a release statement made by some members of the party in the state that said both Adewusi and Akande worked against the party during the 2019 presidential and state elections.

Adewusi and Akande said, there is no crime in raising voice over what it sees to bring negative result to own party as both had done before the election and all it needed now is to for all to come together to prepare for 2023 election.

Re: OUR CASE AGAINST EX-MEMBERS SEEKING UNDUE RECOGNITION THROUGH CHEAP BLACKMAIL

Our attention has been drawn to the advertisement published in the Nation Newspaper of Monday 02 March 2019 by some members of our great party, the All Progressives Congress (APC) in Oyo State on the controversy surrounding nominations into the Office of National Deputy Chairman (South) of the party.

In the said advertisement, the names of Dr. Ismail Adewusi and Professor Adeolu Akande were listed among those who decamped to other parties and worked against the APC in the last general election.
Nothing could be further from the truth.

Our initial reaction was to ignore the preposterous publication and maintain our silence on the subject matter. Our silence had been informed by the strong conviction that the contentions on the matter have the potential of re-opening old wounds and frustrate all efforts at reconciling the warring groups in the party in Oyo State. This will exacerbate the crisis that has engulfed the party since 2017.

However, we are constrained to make this statement to correct some wrong information and malicious allegations contained in the advertisement. The allegation that Dr Ismail Adewusi and Professor Adeolu Akande, at any time left the party or worked against the party in the 2019 elections is not only disingenuous, it is patently evil. We make bold to say we worked tirelessly for the party at great personal and financial cost and remain among the biggest donors to the campaign funds of the party in our respective local government areas.

It is true that we raised our voices, like many other concerned party members, to call attention to some actions within the party, which we expressly warned could cost the party victory in the 2019 elections if not duly addressed. These concerns were not expressed behind the doors or clandestinely. They were expressed openly in many letters to the national leadership of the party and advertisement in newspapers to call the attention of the national leadership of the party to these issues. The concerns remained unresolved until the elections and as many party members feared, the party lost the general elections in the state. The loss of the gubernatorial election, and victory in only five of 32 state house constituencies are a true reflection of the consequences of the crisis within the party in the state. The party performed better in the Presidential and National Assembly elections because of the immense goodwill and popularity of President Muhammadu Buhari among party members – in spite of their differences – and among the population of the state.

It is unfortunate that one year after the election, the party is still neck deep in crisis as evident in the hot exchanges over the choice of Deputy National Chairman (South) of the party in recent weeks. The resort to name calling, blackmail, and puerile falsification of recent history of the party will not help anyone as we prepare for the 2023 general elections. We cannot afford to walk this path again if we are desirous of returning to power in Oyo State come 2023.

Our appeal is that the national leadership of the party should once again step into the crisis in the APC in Oyo State, lead the effort at genuine reconciliation of the contending members, and save the party from itself. The mutually debatable claim of “everyone-is-responParty – but-me,” is not only self-serving, but unhelpful. There can be no progress without the truth to advance it. The issues at the root of the crisis are well known, and in the spirit of seeking a resolution of the crisis, do not need to be repeated here.

We wish to place on record our profound appreciation of the fatherly efforts of President Muhammadu Buhari GCFR to resolve the crisis in the APC in Oyo State. We also appreciate the untiring efforts of the national leadership of the APC to bring the warring groups together through the many reconciliation teams that have visited the state. We appeal to all contending members to reciprocate the good gesture of President Buhari and the national leadership of the party by sheathing their swords to embrace peace. The strong message in the outcome of the 2019 elections is that none of the warring groups, despite the indignant posturing, has the capacity to reclaim Oyo State in future elections alone.
Our strength lies in our unity.