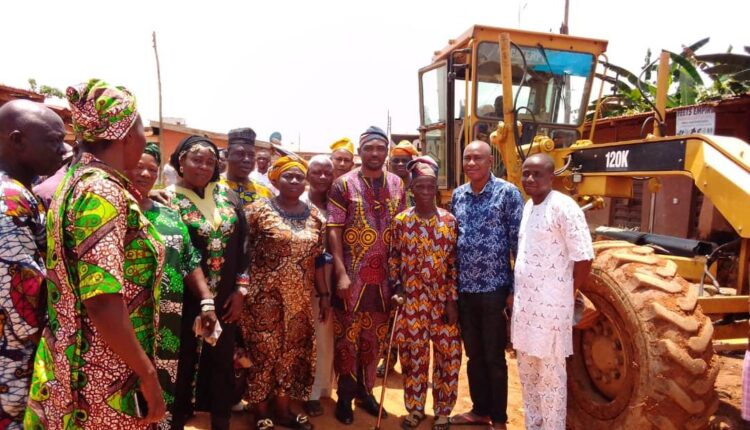 To ameliorate the suffering of the people and to complement the efforts of the state government under the able leadership of His Excellency, Engr Oluseyi Abiodun Makinde on infrastructural development, the Political Head/Administrator of Omi-Apata Local Council Development Area, Hon Bamidele Lawal has embarked on the rehabilitation of Oloruntumo- Ojimi- Ayinde road.

While inspecting the on- gong rehabilitation which involves filling and grading of the road, Hon Bamidele Lawal reiterated the gon-gongt’s commitment to ensure life is more bearable for the people of Omi-Apata LCDA.

The council boss emphasized that Oloruntumo-Ojimi- Ayinde road has been in condition for five years and the LCDA has deemed it fit to rehabilitate it for easy passage for motorists and to improve the economic activities of the people of the area.

Community leaders in their various responses, Mr. Emmanuel Adejare and Hon Rasaq Latino who is also a PDP stalwart expressed their appreciation to Hon Bamidele Lawal for responding to the yearnings of the people of the area.

The Honourable member representing Ibarapa East/Ido federal constituency in the House of Representatives Hon Taiwo Oluyemi Adewale who was also present during the inspection gave Kudos to Omi-Apata LCDA authority under the leadership of Hon Bamidele Lawal for giving the road a facelift.” I appreciate Hon Bamidele Lawal for coming to the aid of our people in this area” he said.

Hon Bamidele Lawal then commended Hon Taiwo Oluyemi Adewale and other PDP chieftains for their moral support and presence during the inspection.