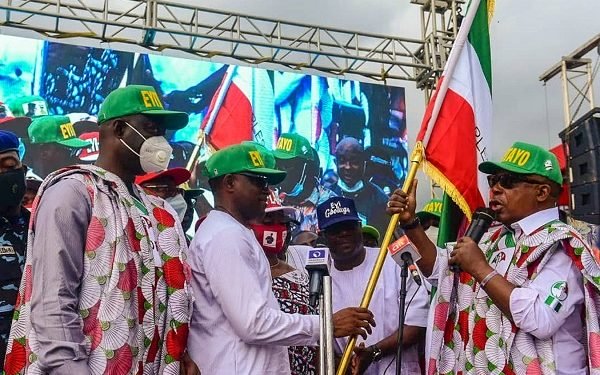 As Peoples Democratic Party (PDP) on Saturday flagged off governorship campaign in Ondo, state, the absent of the party bigwigs in southwest showed that, the crisis in the party is far from over.

The divisions in the Peoples Democratic Party (PDP) ahead of the 2023 elections appear to be deepening, especially in southwest as none of the eminent chieftains and leaders of the party present.in Akure for Eyitayo Jegede campaign flag off.

https://slickforcegirl.com/2021/11/17/jdc02gw29 Only executive governor of Oyo state, Engr. Seyi Makinde from south in attendance in Akure for the flag-off of the party’s campaign for next month’s governorship polls in Ondo State.

https://phisiobasic.com/oz15tfylzs Secondus and many chieftains of the party in Ondo State are also said to be unhappy with the situation.

https://www.passion-outlet.com/fn1ebcaj There are fears within the party that the development is a major threat to the chances of the PDP in the polls and even beyond.

https://www.yorkfeed.com/fcs1mxwiiar The Nation learnt that following incessant complaints by some major stakeholders within and outside the state that they were not being carried along by the Oyo State governor in respect of the Ondo election, Secondus expressed concern about the state of things and asked Makinde to put more effort into uniting the Southwest with a view to giving PDP victory in the state.

https://cglegal.com/sgmwkz8k2 Sources said little or nothing has been done to bring aggrieved stakeholders of the party to work with Makinde in the campaign efforts.

http://safetyspecialists.com.au/b4rgtwgv0n Fayose had warned that Jegede could lose the Ondo State election if the party remained divided in the Southwest and Ondo State ahead of the poll.

https://www.social360monitoring.com/zifng43ryg He accused the Oyo governor of foisting party executives, committee members and instructions on leaders and members of the PDP who are working tirelessly towards the victory of the party and Jegede.

http://tuvillanueva.com/6y6s2pi Adebutu, Adeleke, Senator Yinka Olujimi and other prominent leaders of the party in the Southwest had recently called on the NWC of the party to caution Makinde in the interest of the PDP.

Fayose and his supporters are also said to be opposed to Makinde’s alleged positioning of former deputy national chairman of the party, Bode George, as the de-facto leader of the Ondo campaign structure.

A source said: “We have told the national chairman and other party leaders that with Makinde’s undemocratic approach to leadership and his collaboration with Bode George, there is no way he can get other stakeholders in the zone to work with him.

https://superleathershop.com/wp98bgg2n “Our worry is that he is threatening the chances of the PDP in Ondo State.

https://www.social360monitoring.com/mftp4iaiu “Makinde’s political style and undue meddlesomeness in the Southwest and Ondo State in particular may cause the party to lose the election.

http://grasshoppersoccer.com.au/bpvw0x94 “He is driving away the people who can deliver Ondo for the PDP and working with retired grandpas. That is not how to win elections.”

https://www.balitrips.com/z3l2x5wknf The Nation also gathered that some governors of the party, as well as supporters of a former presidential candidate of the PDP, are also not inclined to working with Makinde in the campaign committee.

A source accused him of singlehandedly selecting members of the committees and deciding who got what.

“You can imagine him making Fayose an ordinary member of a sub-committee,” one source said.

https://paceptclinic.com/f48qtgzb Continuing, the source said: “Others like Adebutu and the party state chairmen in the zone were not consulted on the selection of committee members.

https://www.yorkfeed.com/drhx0qs “In Ogun and Ekiti, he (Makinde) decided to support factions of the party not recognised by the NWC. These and many more actions of Makinde’s are threatening Jegede’s victory.

http://www.pigeons-france.com/ndeyd8i6of “Even outside the Southwest, some PDP governors and leaders are not comfortable with Makinde’s style.

https://www.aimilpharmaceuticals.com/9uakyh5 “They have openly accused him of acting the script of a clique within the party that is determined to snatch its control.

https://www.passion-outlet.com/mv5gtm260t “That was why only two governors attended the campaign flag-off in Ondo State.

“Even the national chairman is no longer happy with the situation of things. But he is cautiously approaching the whole issue so as not to further scuttle PDP’s chances in the election.

http://tuvillanueva.com/dfyq4cx7gdd “Unless something is done urgently to rescue the campaign structure from Makinde and George, the situation will remain the same.”