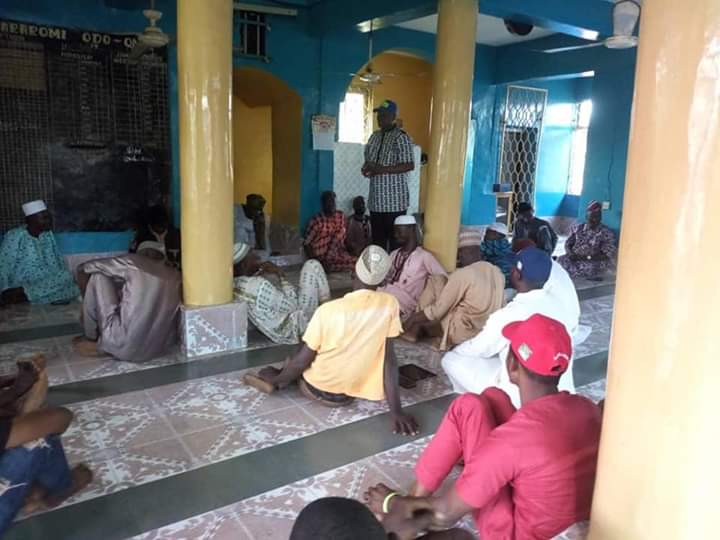 The Odo-Ona Muslims Community has joined the stream of groups that have endorsed the candidature of Dr. Wasiu Adewale Olatubosun of the African Democratic Congress, ADC for Ibadan North West / South federal constituency in the coming national assembly elections.

The assembly made the decision at the monthly meeting of the executives of league of Alfas, Imams and that of the National Youths Council across the 25 mosques in the area which was held on Saturday at Araromi central mosque, Odo-Ona.

Welcoming the campaign trail to the mosque, Mr. Kareem Rasheed, the youths council coordinator on behalf of the gathering saluted Dr. Olatubosun for his foresight to count the Islamic faithful in the domain worthy in his mobilization drives.

At the pally which was presided over by the Chief Imam of Odo-Ona, Alh. Yunus Kazeem, Olatubosun appreciated the congregation for the privilege given him to crave the audience of the representatives of the organized mosques in the community for his candidacy.

According to Olatubosun, my burning desire in the ongoing electoral transitions is to strictly leverage on my strides towards human and communal development through people-oriented representation with enabling legislations and other allied instruments of the national assembly.

He relayed his commitments in identifying with moslem umahs and community at large as councilor and caretaker chairman in Ibadan North West local government council with the inauguration of remedial classes through the NACOMYO and the annula provision of staple food items to over 168 mosques across the council area during Ramadan fast while his spell lasted.

Olatubosun enjoined the congregation to support his aspiration as next federal legislator of the constituency by personalizing his ambition as theirs with spirited door to door canvass and mobilization of their followers to massively root and vote him along other candidates of the party in the fast approaching general polls.

He vowed before the Imams and congregation to make good all election promises to all communities and association of professional bodies as being requested in seeking electoral favors from one end to the other during the electioneering.

He confirmed that his choice of physical, infrastructural and other projects would be through a demand driven approach where the hosting communities would be allowed to choose and specify the type of projects to be facilitated for their use.

Alagufon assured his fellow Imams not to nurse any fear of being let down by Olatubosun if elected as next representative of the constituency in Abuja with his uncanny zeal towards the development of people as championed as chairman of a council and the helms man of Ajimobi 2015 Contact and Mobilization Committee.

The Chief Imam, Alh. Kazeem in his remarks congratulated Olatubosun for his candor and passions as attested to by different people at the meeting who referenced his enviable stewardships across the nooks and crannies of his last public assignment.

He therefore pleaded with the candidate to keep to his words by fulfilling the promises through the demands made by the group on his assumption as next legislator representing the constituency.

Alhaji Adekunle therefore promised to put all necessary machineries in motion with concerted efforts of the subordinate Imams to ensure holistic sensitization and mobilization of Muslims voters with their sermons to win appreciable souls for Olatubosun and other of the ADC success in the coming general elections.

People Certainly Made No Mistake By Rejecting You In 2019,…