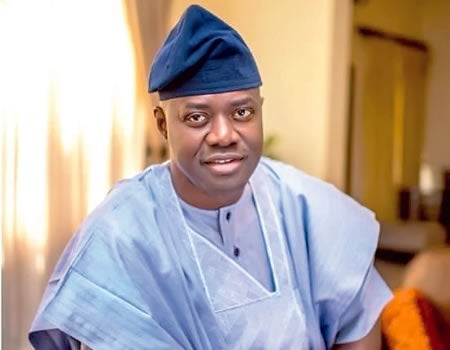 The party leaders and members of the African Democratic Congress (ADC), Oyo State chapter, on Tuesday after a meeting of the party held at Emmanuel Alayande Teachers’ house Samonda, Ibadan declared their continues support for the government of Engr. Seyi Makinde. The votes of confidential of ADC was made known to the public after a crucial evaluation of
administrative style of the State governor.

The entity parties at the meeting includes : Unity Forum, Labour Party, Accord, Coalition for Nigeria Movement (CNM), and old promoters of old ADC.

The communique reads that: “the party restates its unflinching support to the governance style of the Government of unity led by Engineer Oluwaseyi Abiodun Makinde as being widely adjudged by the populace as truly progressive.

“Commends and appreciates Governor Makinde’s efforts in his populist policies and programmes which include: prompt payment of salaries, abolition of fees in public schools, distribution of free exercise and textbooks, review of disengagement in the civil service, employments generation through Public-Private Partnership (PPP), health reforms, security rejuvenation and many more.

“assures Governor Makinde’s administration of its unalloyed support towards righting the many wrongs that characterised the immediate past administration in the state and committed to the government of unity even as remind the Governor to duly respect the mutual and gentleman coalition agreement with the coalition parties in all the strata of his administration.”

The ADC then “dissociates itself from mischievous moves especially a misleading press release credited to some fifth columnists in the name of the party seeking attentions in the polity.”

Ex Oyo Central Senator, Monsurat Sumonu addressing the journalist after the meeting, she said that party is meeting for the first time since the last election, noting that it is imperative that as a party they meet to notch up on some issues.

She said “We have not been able to meet since the last election and we thought it necessary for us to meet so that will unite us and more so for the fact that we are in the coalition group, these are the things that we can all decide collectively on the way forward, that was why we are here.

“We have met with the governor, and we can say that a governor is a man of his words and that he is still with the coalition agreement and so we believe that we relate the outcome of our meetings with him to the entire stakeholders and party members.”

You’re The Pride Of Our State, Oyo PDP Commends…

Reopening Of Schools, Religious Houses In Oyo Is…

Akinosun Celebrates The Life Of Late Olubadan, Says It’s A…