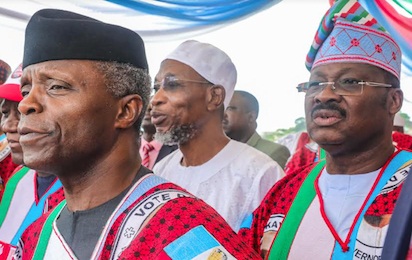 A pan-Igbo socio-political pressure group, the South East Revival Group, SERG, has urged Vice President Yemi Osinbajo and Governor Abiola Ajimobi of Oyo State to exercise restraint in their utterances as the country goes into general elections next year to avoid pitching their Yoruba ethnic group against the Igbo.

The national co-ordinator of SERG, Chief Willy Ezugwu in a statement issued in Abuja, yesterday, recalled that “while speaking at the Alaafin’s palace, the Vice President had urged the Yoruba to vote for President Muhammadu Buhari to pave way for Yoruba presidency in 2023, but Governor Ajimobi took the narrative higher by declaring that the 2019 election was between the Hausa and Yoruba alliance on one hand and the Hausa and Igbo on the other.

“We condemn in strongest terms possible, this brand of ethnic politics and this unprovoked and unjustified attacks on Igbos by the two Yoruba leaders. Such utterances can spark ethnic cleansing or inter-tribal crisis.

“Nigerian leaders must live by example and avoid hate speech ahead of 2019 general elections. This is important because we must have a country first before we can think of who rules over its affairs.
“Nigeria is bigger than our regional ethnic sentiments. We should rather focus on issues of justice and peaceful coexistence to save the country from disintegration.”

AJIMOBI THANKS CITIZENS FOR STANDING BY ADMINISTRATION, URGES SUPPORT FOR ADELABU