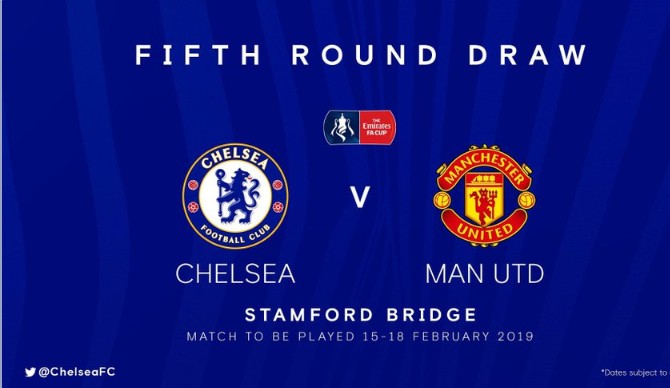 FA Cup 5th round draws will see Chelsea battle Manchester United in the next stage of the championship next month – The Blues outclass Ole Gunnar Solskjaer when they met in the final of last year’s edition at Wembley Stadium – Sarri’s men are chasing their 9th FA Cup title while United have an eye on equaling Arsenal’s record in the competition Chelsea will continue their FA Cup title defence in the fifth round when they battle Manchester United at the Stamford Bridge next month. The Blues cruised to a convincing 3-0 win over Sheffield Wednesday with goals from Willian and Callum Hudson-Odo sealing the win for Maurizio Sarri’s men. This fixture is the toughest of the round as Premier League champions Manchester City will face the winner of Middlesbrough or Newport County in the next round.

It will be recalled that Chelsea stunned Jose Mourinho Red Devils on May 19, 2018 by a lone goal with Eden Hazard scoring from the spot kick.

Chelsea are chasing their 9th title this term, while United are hoping to equal Arsenal’s record of 13 titles as they currently have 12 in their cabinet. Below are the rest of the fixtures as AFC Wimbledon, after their epic win over West Ham United in the last round are paired with Millwall.

Stall Negotiation : ALGON Is Negotiating On Behalf Of…