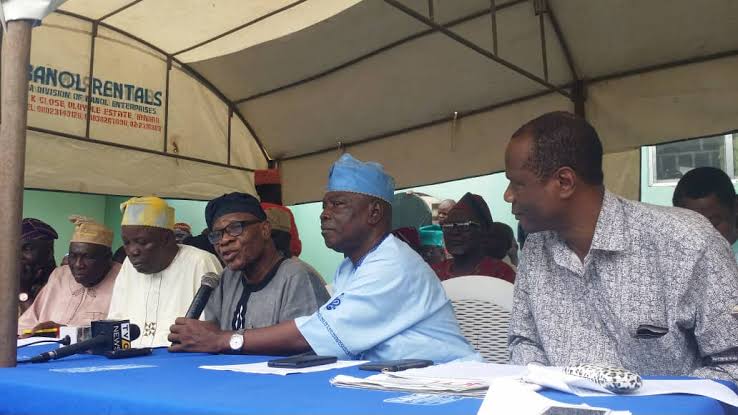 More details of the conflict of interests within the followers of Late Lamide Adesina has been revealed, as the purported 25m received by a faction of Lamist/Unity Forum led by Alhaji Fatai Ibuikunle, former Personal Assistant to the late Lam Adesina from APC national leader Aiwaju Bola Hammed Tinubu in Lagos was the main reason for division in the group.

It will be recalled Alhaji Fatai Ibuikunle led the delegation of Lamists to visit Tinubu in Lagos last week. After meeting with Asiwaju, they collected Tinubu’s N25m with promise that all the Lamists will declare support for Chief Adebayo Adelabu but all was let loss when other members who are unaware of the visitation to Tinubu kicked against such move and vowed not to have anything to do with Oyo APC or Chief Bayo Adelabu, the Oyo State governorship candidate of the All Progressives Congress (APC).

The meeting called by Tinubu was aimed at reconciling with the aggrieved Lamists who ceded from APC to ADC so as to join effort with Oyo APC to install Chief Adelabu as governor.9

After collecting the 25m, Alhaji Fatai and his team got to Ibadan to release press statement announcing the endorsement of APC governorship candidate. Ibikunle said the group “bowed to pressure from the national leadership of the APC and resolved to team up with their former party to ensure victory for Chief Adebayo Adelabu in this Saturday’s gubernatorial election in the state”.

“In an emergency meeting held on Tuesday at a private location in Ibadan, leaders and members of the Forum unanimously considered the reports of a delegation which had earlier met with Senator Bola Ahmed Tinubu and agreed to unite for the sake of peace and progress of the pacesetters state,” he added.

Said, all the issues that led to the schisms within the Oyo APC were presented and treated accordingly while far reaching agreement were reached by both parties with a view to facilitating victory for the APC gubernatorial candidate, Chief Adebayo Adelabu, on Saturday.”

In disassociating the real Lamists from money bag Lamists, a group led by Late Lamidi Adeshina son, Dapo Lam help a meeting yesterday 7th March at at the Lam Adesina Hall in Felele, Ibadan, to dissociate themselves from the defection of the other group to the APC.

Lamists spokesman, Hon. Wasiu Olatunbosun condemned “the surreptitious conduct and purported endorsement of the gubernatorial candidate of the APC by some few individuals masquerading as adherents of the late former Governor”.

In a communique issued after the meeting, available to Westerndailynews, it read:

“Lamists/Unity Forum have nothing to do with All Progressives Congress, APC, with its sheer disdainful conduct to rubbish and obliterate the legacy of the late former Governor.

“We have not endorsed any gubernatorial candidate as we are still consulting far and near. This is to make sure that opinions of all members of Lamists/Unity Forum as well as of those who contested the National Assembly elections are sought before arriving at a conclusion on who to support.”

They also maintained that they were “NOT rejoining the APC” because the reasons they left the party had not been addressed. They also said their membership of the ADC remains valid, and that Senator Olufemi Solagbode Lanlehin remains the leader of the group.

“Sen. Monsurat Sunmonu, Hon. Adedapo Lam Adesina, Hon. Sumbo Olugbemi, Dr. Wasiu Olatubosun and a host of others remain members of the ADC as long the national leadership of APC refuse to do the needful in addressing the injustice that characterized the conduct of the last congress in Oyo State,” the group added.

Post Protest : Makinde To Give N500m To EndSARS Protest…